IPL 2019: CSK Crush KKR In A Low-Scoring Encounter To Go Top Of The Table

Chennai Super Kings maintained their unbeaten run at home with a seven-wicket win over Kolkata Knight Riders on Tuesday. 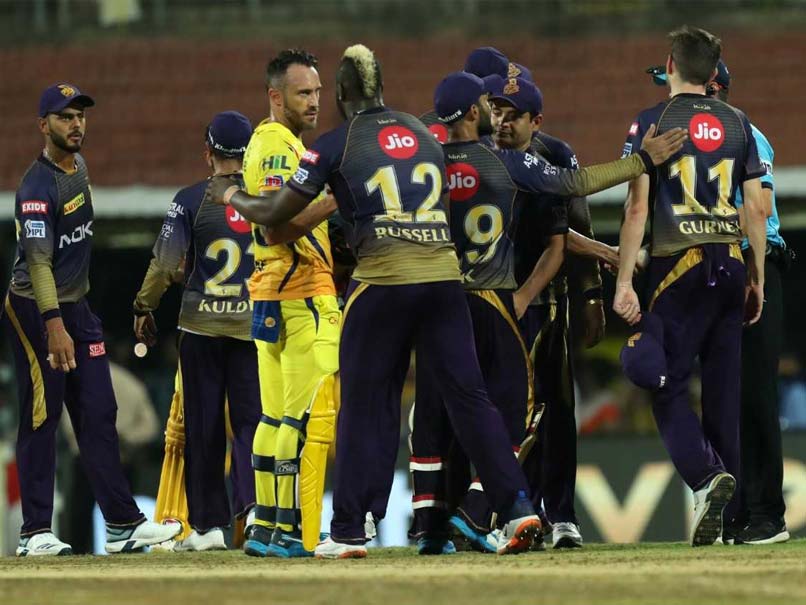 Faf du Plessis scored an unbeaten knock of 43 runs and stitched a 46-run stand with Ambati Rayudu (21) to help Chennai Super Kings crush Kolkata Knight Riders by seven wickets in a low-scoring encounter at the MA Chidambaram Stadium on Tuesday. With this win, CSK claimed the top position in the IPL 2019 points table. After opting to bowl, the hosts restricted KKR to 108/9 despite an unbeaten half-century by Andre Russell. Faf du Plessis top-scored for CSK with 43 runs while Kedar Jadhav stood unbeaten on eight as the home team chased down the target with 16 balls to spare.

Shane Watson (17 off 9) smashed two fours and a six early on in the run chase before falling to a soft dismissal off spinner Sunil Narine.

Suresh Raina (14) too did not cash in on the opportunity to make a big score and perished in an attempt to hit Narine out of the park, leaving CSK at 35 for two in five overs.

Since the asking rate was not an issue, Du Plessis (43 not out off 45) and Rayudu (21) went about their job with little difficulty. The South African, who scored 54 in his first game of the season here on Saturday, played another solid innings to take the team home.

Earlier, a lot depended on the in-form Russell after a poor show from the KKR batting unit. He played the only way he knows, going for big shots, and succeeded to a certain extent to finish with five fours and three sixes.

KKR were under pressure from the word go as Lynn and Sunil Narine fell within the space of five balls.

First, Chahar trapped Lynn leg-before wicket for a duck in the first over, as the Aussie missed a pull off a delivery that kept low. In the next over, Harbhajan tossed one up to Narine, who attempted a big shot, only to skew it to the point region where Chahar took a good catch running backwards.

Robin Uthappa (11, 9 balls, 2X4) played a couple of good shots, before perishing to a pull which landed in the safe hands of Kedar Jadhav at deep-square leg.

A lot was expected of skipper Dinesh Karthik but he flattered to deceive, hammering a shot off Tahir straight into the hands of Harbhajan at mid-wicket, to be dismissed for 19 to leave KKR in trouble at 44 for five.

That KKR's 50 came up only in the 12th over, indicating how much their batsmen struggled to come to grips with the surface at Chepauk.

Andre Russell IPL 2019 Cricket Chennai Super Kings vs Kolkata Knight Riders, Match 23
Get the latest updates on T20 World Cup, check out the T20 World Cup Schedule and Live Score . Like us on Facebook or follow us on Twitter for more sports updates. You can also download the NDTV Cricket app for Android or iOS.