"Fortunately, Virat Kohli Carried For Us, Finished The Game": KL Rahul After Win Against West Indies

KL Rahul became the joint third fastest to score 1,000 T20I runs as India defeated the West Indies by six wickets in the first T20I in Hyderabad. 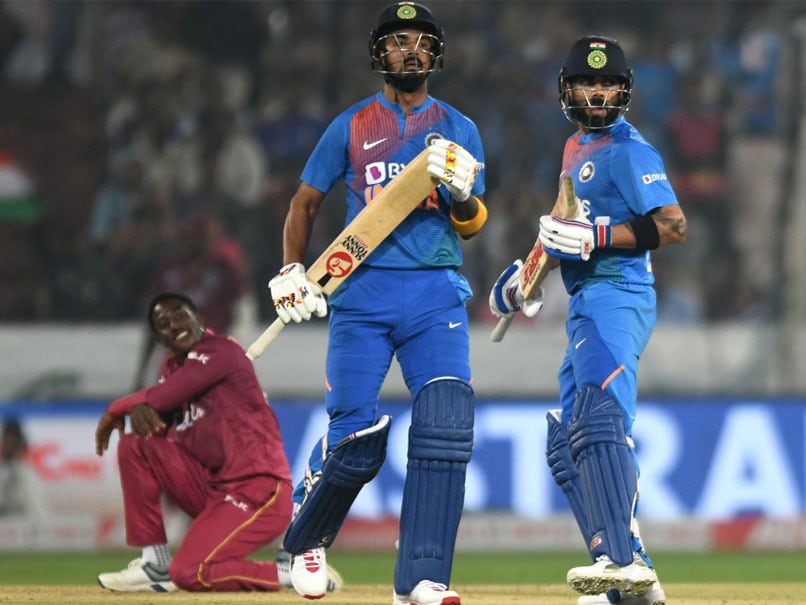 Indian batsman KL Rahul, who played a crucial knock in the first T20I against West Indies which India won by six wickets, has insisted he is not worrying about next year's World T20 and is right now focused only on making the best use of opening opportunity. On Friday evening, Rahul scored 62 off 40 deliveries at the Rajiv Gandhi International Stadium and became the joint third fastest to score 1,000 T20I runs -- reaching the milestone in 29 innings. The Karnataka batsman has got an opportunity to open in the T20I series against West Indies as regular opener Shikhar Dhawan is recovering from a knee injury.

Dhawan had been persisted with in the opening slot despite his struggles with strike rate and the fact that he hasn't managed a single fifty-plus score in his last 13 T20I innings.

On the other hand, Rahul has managed three half-centuries in seven innings this year, scoring at a decent pace and thus pushing his case to feature as the frontline opener for the T20 World Cup slated to be held next year in Australia.

However, the flamboyant right-handed batsman isn't looking too far ahead. "It's a long way, honestly. I've got the opportunity to bat at the top of the order again after a couple of series. So (I'm) looking forward to just making the best use of it," he said while addressing the post-match press conference.

"Today was a good outing, a good hit in the middle and hopefully I just continue the same thing and not worry about October next year, there's are lots of games before that."

Talking about the wicket on which both the teams managed to score more than 200 runs in their innings, Rahul said: "I am not saying the wicket was to bat. It was not the easiest wicket to bat on."

"When you are chasing 200 plus runs you obviously want to come out hard and you know you are chasing ten runs an over. We knew that once we hit one or two boundaries then it will start to bring a lot more boundaries."

The chase was anchored by skipper Virat Kohli, who bettered his personal best in the shortest format of the game and scored an unbeaten 94 to take India across the line with eight balls to spare.

"We kept the intent going and the plans were very clear that you have to hit boundaries. Fortunately, Virat carried for us and finished the game," Rahul said.

India and West Indies will now take on each other in the second T20I in Thiruvananthapuram on Sunday.