As the two teams landed in Thiruvananthapuram for the second T20I, local cricketer Sanju Samson received a grand welcome from fans. 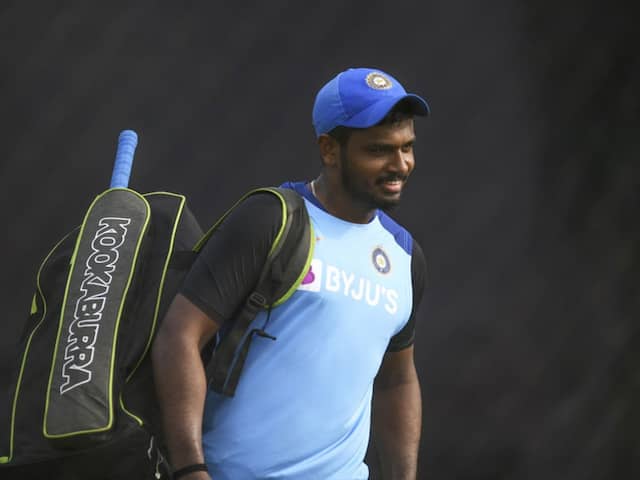 India are set to take on the West Indies in the second Twenty20 International (T20I) in Thiruvananthapuram on Sunday. India lead the three-match series 1-0 after claiming a hard-fought win over the visitors in Hyderabad in the series opener on Friday. Ahead of the second T20I, young wicketkeeper-batsman Sanju Samson received a hero's welcome at the airport when the Indian team landed in the 25-year-old's hometown. Rajasthan Royals took to Twitter to share the video of the grand welcome for Sanju Samson. "A hero's welcome for Sanju," Rajasthan Royals captioned the video.

On Saturday, a group of fans were hopeful to see Sanju Samson in the playing XI despite a good show with the bat from KL Rahul.

In the first T20I, riding on Shimron Hetmyer's maiden T20I half-century along with quick knocks at the end from Kieron Pollard and Jason Holder the West Indies posted a huge total of 207/5.

In reply, Rohit Sharma's opening partner KL Rahul looked in fine touch as he scored his seventh half-century in the shortest format of the game.

KL Rahul scored 62 runs off 40 deliveries to help India chase down a mammoth total of 208 runs with eight balls to spare.

While KL Rahul scored a half-century, it was India skipper Virat Kohli who stole the show with his unbeaten knock of 94 to help the hosts go 1-0 up in the three-match series.

The second T20I will be played in Thiruvananthapuram and Mumbai will host the final match of the series on Wednesday.