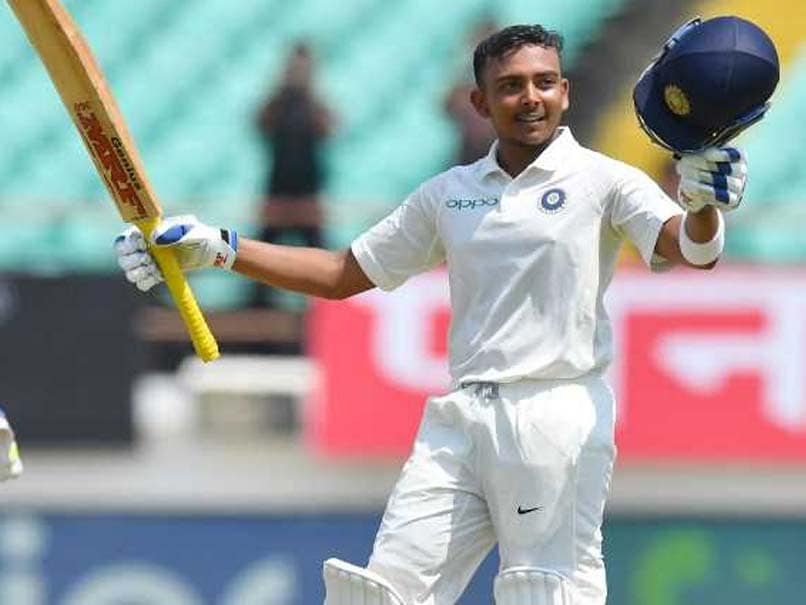 Prithvi Shaw announced his arrival in international cricket by scoring a brilliant century on the opening day of the first Test against the West Indies at the Saurashtra Cricket Association Stadium in Rajkot. The India U-19 captain became the youngest Indian to score a Test century on debut. Prithvi, at 18 years and 329 days, reached the coveted three-figure mark off just 99 deliveries. Soon after this stunning feat, both cricketers and fans took to Twitter to praise the 18-year-old sensation from Mumbai. However, the most notable compliment came from Team India coach Ravi Shastri.

Applauding Prithvi for his fearless batting, Shastri said that the youngster displayed shades of both Virender Sehwag and Sachin Tendulkar.

Well played young man @PrithviShaw for a free and fearless performance on debut. A bit of Viru and the Master there #INDvsWI pic.twitter.com/JQ2VtysqaU

Talking about the century, Prithvi said, "I don't know how I manage but whenever go in the middle, I try to play to the merit of the ball and even in this game I went in with the same mindset. I did not try anything new thinking it is my first Test. Played the same way I have played India A and domestic cricket."

Prithvi, who became the 293rd cricketer to represent India in Tests, also became the third-fastest centurion on Test debut. India's southpaw Shikhar Dhawan remains the fastest in this club with an 85-ball hundred against Australia in 2013 at the IS Bindra Stadium, Mohali. West Indian cricketer Dwayne Smith (93 deliveries) pulled off the same feat against South Africa in Cape Town in 2004.

West Indies Cricket Team Prithvi Shaw Ravi Shastri Cricket India vs West Indies 2018 India vs West Indies, 1st Test
Get the latest updates on ICC T20 Worldcup 2022, check out the Schedule and Live Score. Like us on Facebook or follow us on Twitter for more sports updates. You can also download the NDTV Cricket app for Android or iOS.