India vs West Indies, 2nd ODI: Virat Kohli Says He Is Proud Of His Milestone

Virat Kohli was adjudged man of the match for his unbeaten 157. 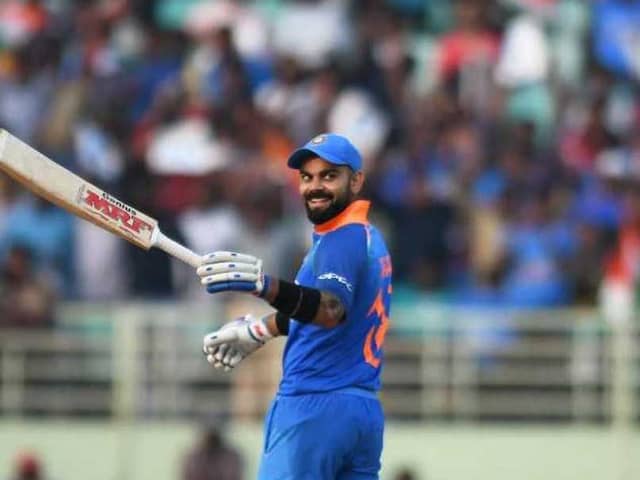 Virat Kohli scored his 37th ODI hundred in the 2nd ODI against the Windies.© AFP

Virat Kohli struck a brilliant century to help India post a competitive 321/6 against the Windies in the second One-day international (ODI) in Vishakhapatnam. In reply, Windies batsmen Shai Hope (123 not out) and Shimron Hetmyer (94) played beautifully to help the Windies salvage a draw in a last-over thriller. Kohli, adjudged man of the match, on Wednesday became the fastest man to 10,000 ODI runs, surpassing batting legend Sachin Tendulkar. In the post-match conference, Kohli said that he is proud of his milestone and also credited the tourists for showing great character.

"Personally, I'm pretty proud of my innings and my milestone," Virat Kohli said.

A 143-run partnership between Hope and Hetmyer helped their team recover from early jolt and edge closer to overhauling the target. However, Indian bowlers held their nerve in the death overs to deny the visitors a victory.

"It was a great game of cricket, great to be part of it. Full house and credit to the West Indies team as well, they showed great heart. Specially in the second innings, when they got stuck in despite being three down. Beautiful partnership between both those guys but the way two teams played it was a fair result," Kohli further added.

The 29-year-old batsman credited Kuldeep Yadav and Yuzvendra Chahal for bringing India back in the game.

"When the run rate fell under 6, I thought they are in a strong position to finish off well now but then Kuldeep got us back in the game. Chahal bowled a brilliant over and Shami, Umesh came back beautifully," Kohli further added.

"And the game nicely drifted in the last 7 overs, especially in the last 5-6 overs. In the end, we had got the game but then one boundary off Umesh, off the shoe and that boundary from Rayudu just a few inches away. We all need to enjoy the game," Kohli remarked.

India still lead the five-match ODI series 1-0, with the third ODI slated to be played at the Maharashtra Cricket Association Stadium in Pune on October 27.

Virat Kohli India vs West Indies 2018 India vs West Indies, 2nd ODI Cricket
Get the latest Cricket news, check out the India cricket schedule, Cricket live score . Like us on Facebook or follow us on Twitter for more sports updates. You can also download the NDTV Cricket app for Android or iOS.