Rishabh Pant was given the wicketkeeping duties ahead of the experienced Dinesh Karthik for the 1st T20I between India and the Windies. 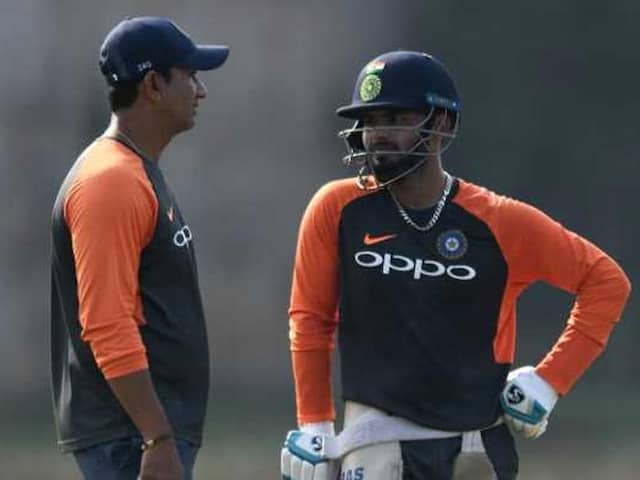 Rishabh Pant has been named as the wicketkeeper for the 1st T20 against the Windies.© AFP

The Board of Control for Cricket in India (BCCI) announced the 12 for India that will take on the Windies in the first of the three-match Twenty20 Internationals (T20Is) on Sunday at the Eden Gardens in Kolkata. Rishabh Pant was given the wicketkeeping duties for India ahead of the experienced Dinesh Karthik. MS Dhoni is not part of the Indian team after being left out of the squad for the T20I series against the Windies and Australia. Selectors said the decision to leave out Dhoni was made to shore up India's back up options behind the stumps, and going by the team announced on Saturday evening, Pant is ahead of Karthik in the race for the wicketkeeping spot.

"The Indian team management has named the 12 ahead of the first T20I at Eden Gardens, Kolkata. After winning the Test series 2-0 and a comprehensive 3-1 victory in the recently concluded ODI series, the Indian Cricket Team will now play Windies in the three-match Paytm T20I Series," the BCCI said in a statement.

Karthik might yet get into the playing XI as a specialist batsman. Manish Pandey and Krunal Pandya could also get into the team for Sunday but that will depend on whether or not India go in with five specialist bowlers.

Umesh Yadav has been left out with Bhuvneshwar Kumar, Jasprit Bumrah and Khaleel Ahmed picked as the pace trio with Yuzvendra Chahal and Kuldeep Yadav veubf chosen as frontline spinners.

If India decide to leave either Kuldeep or Chahal out or go in with the two pacers instead of three then Krunal Pandya could be in with a chance of making his T20I debut for India.

Captain Rohit Sharma and Shikhar Dhawan are set to open for India with KL Rahul primed to come at one-down in the absence of regular skipper Virat Kohli, who has been rested for the series.

The following players have been selected for the 1st T2OI.

MS Dhoni India vs West Indies 2018 India vs West Indies, 1st T20I Cricket
Get the latest Cricket news, check out the India cricket schedule, Cricket live score . Like us on Facebook or follow us on Twitter for more sports updates. You can also download the NDTV Cricket app for Android or iOS.