Ravindra Jadeja was the pick of the bowlers in the fifth ODI, picking four wickets for 34 runs. 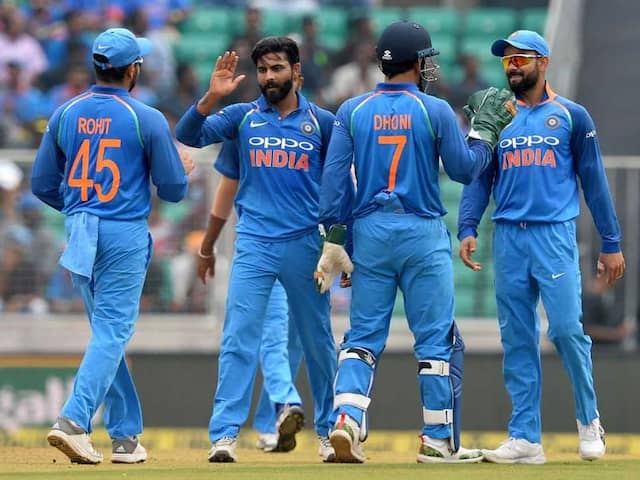 Ravindra Jadeja was confident that he got his man.© AFP

Former India skipper MS Dhoni hardly fails to judge an LBW decision from behind the stumps. In a rarity, MS Dhoni was left unconvinced if Shimron Hetmyer was caught in front of the stumps by Ravindra Jadeja during the fifth and final One-day International (ODI) at the Greenfield International Stadium in Thiruvananthapuram on Thursday. But Ravindra Jadeja was confident that he got his man and straightaway asked MS Dhoni and skipper Virat Kohli to go for the DRS review.

The incident took place in the 16th over of the match with all-rounder Jadeja's appeal given not out by the umpire.

Dhoni was not sure but Sir Jadeja says it's out. Jaddu supersedes Dhoni and it's hitting the stumps. A reluctant review pays off. pic.twitter.com/IXdINbkqQ7

Jadeja then convinced Dhoni and Kohli to take the review with the replay showing the ball pitched in-line, impact in-line and the ball hitting the middle stump.

Hetmyer was dismissed for 9 runs leaving the Windies reeling at 54 for four in the 16th over. The away side were then bundled for a paltry 104 runs.

Jadeja was the pick of the bowlers in the match, picking four wickets for 34 runs.

In the match, a dominant India outclassed the Windies by nine wickets to clinch the series 3-1.

India will next host the Windies in three-match Twenty20 International (T20I) series, starting from November 4 at the Eden Gardens in Kolkata.