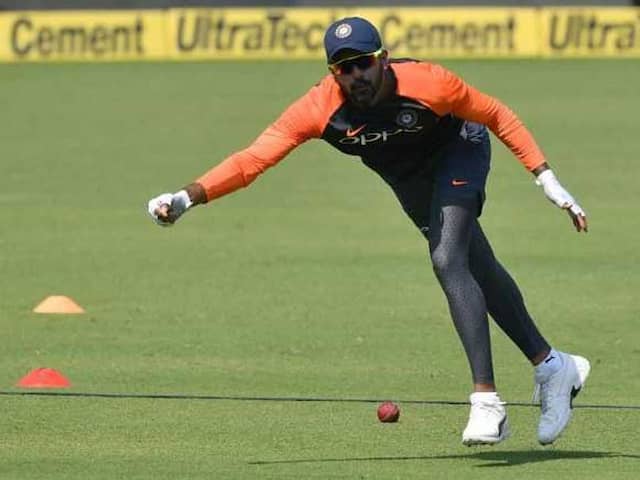 India lead the 2-match Test series against the Windies 1-0.© AFP

Before facing the Windies at the Rajiv Gandhi International Stadium in Hyderabad for the second Test which begins on October 12, the Indian cricket team is busy fine-tuning their slip-catching skills with the help of a machine that is considered indispensable. In a video shared on Board of Control for Cricket in India’s (BCCI) official Twitter handle, India’s fielding coach R Sridhar can be seen introducing a machine that is fondly referred to as a “teammate”.

“It helps our slip catchers improve their reaction and reflexes and increase the number of catches they take during the practice session. This is working well for our team. We have been doing this for the past four months (since the Afghanistan Test). The machine has a different setting in terms of the pace, ball wobbling (useful when we were in England) that has been helping our catchers. We are looking to continue in India as well where it will help us to take low sharp catches," R Sridhar was quoted as saying in the video.

Who is India's new fielding drill assistant ? We find out more about this latest gizmo addition to #TeamIndia - by @28anand

India won the first Test at the Saurashtra Cricket Association Stadium in Rajkot by an innings and 272 runs. The Test match ended in a matter of three days after a dismal performance by the Windies. Prithvi Shaw had starred with the bat for India as he scored a brilliant century on his Test debut. Apart from Prithvi, Virat Kohli and Ravindra Jadeja also had scored fine centuries to help the hosts put the Windies on the back foot.

The Indian bowlers -- Kuldeep Yadav, Ravichandran Ashwin and Mohammed Shami -- too produced brilliant performances to bowl out the visitors twice inside three days of the opening Test to register a convincing win.

Rajiv Gandhi International Stadium, Hyderabad India vs West Indies 2018 Cricket India vs West Indies, 2nd Test
Get the latest Cricket news, check out the India cricket schedule, Cricket live score . Like us on Facebook or follow us on Twitter for more sports updates. You can also download the NDTV Cricket app for Android or iOS.