India bowling coach Bharat Arun was not too impressed with the visiting team's antics and took a dig at them by pointing to the amount of time Virat Kohli batted without any hindrances. 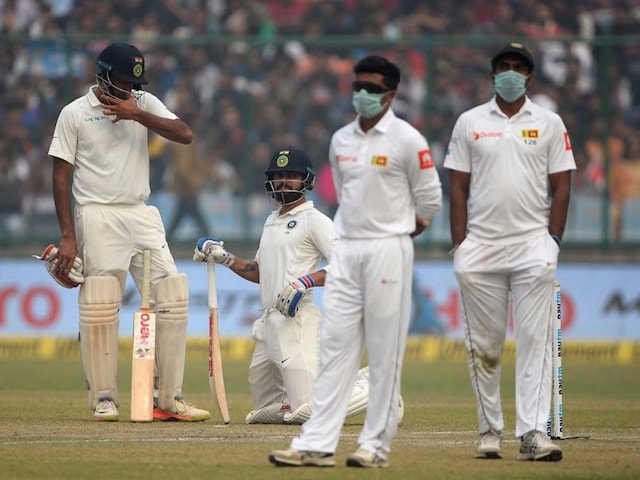 India bowling coach Bharat Arun on Sunday took potshots at the Sri Lankan team after the visitors consistently complained about the poor air quality in Delhi that prompted some Sri Lankan fielders to leave the field. Play after the lunch session had multiple stoppages with Lankan players sporting pollution masks while fielding. Following the drama, India captain Virat Kohli was forced to declare India's innings with the Sri Lankans running out of fielders. India bowling coach Bharat Arun was not too impressed with the visiting team's antics and took a dig at them by pointing to the amount of time Kohli batted without any hindrances.

"Virat batted close to two days and he didn't need a mask. We've focused on what we need to do and achieve for the team."

"Conditions are same for both teams," Arun said.

"There is pollution everywhere in India. BCCI has fixed the schedule. Our job is to go and play so we are focusing on that," Arun said at the post-match conference at the Feroz Shah Kotla Ground.

The drama unfolded in the second session as the play was halted for a few minutes after concerns over the poor air quality, forcing the Sri Lankans players to wear pollution masks.

Sri Lanka complained of poor air quality after two players - Lahiru Gamage and Suranga Lakmal - had to go off. Both seemed to be struggling with their breathing.

As the air quality deteriorated and it became hazy just after lunch, the umpires discussed the issue with the players and the match was halted for around 15 minutes before the floodlights came into action for the rest of the day.

But play was stopped again after a few minutes, seeing that skipper Kohli decided to declare the innings at 536/7.

Wicketkeeper batsman Wriddhiman Saha (9 not out) and middle-order batsman Ravindra Jadeja (5 not out) were at the crease when Kohli decided to declare.

Skipper Kohli hit a career-highest score of 243 as he shared a 135-run stand for the fifth wicket with Rohit Sharma (65) to power India to a big total.

Sri Lanka reached 131 for 3 at stumps on the second day.

At the end of the second day's play, Angelo Mathews (57 batting) and Dinesh Chandimal (25 batting) were at the crease for Sri Lanka.

Comments
Topics mentioned in this article
India Cricket Team Sri Lanka Cricket Team Virat Kohli Bharathi Arun India vs Sri Lanka 2017-18 Cricket
Get the latest Cricket news, check out the India cricket schedule, Cricket live score . Like us on Facebook or follow us on Twitter for more sports updates. You can also download the NDTV Cricket app for Android or iOS.