India were on the verge of an improbable win in the 1st Test at Eden Gardens, Kolkata, before bad light intervened. 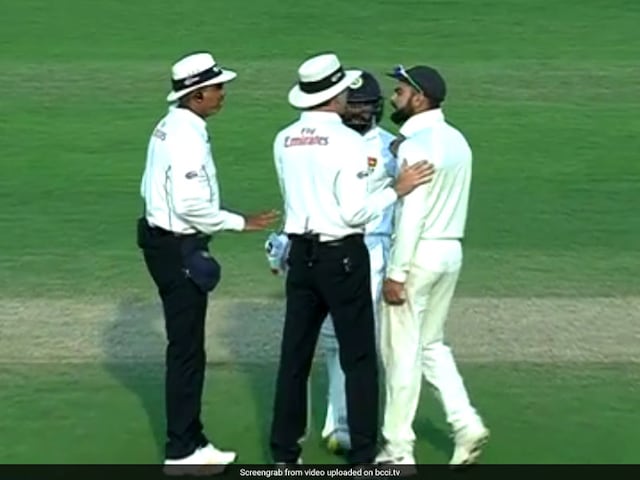 Virat Kohli and Team India were on a mission in the final session of the opening Test against Sri Lanka at the Eden Gardens on Monday. However, the visitors pulled out all the stops to try and derail India's charge. One such instance occurred when Niroshan Dickwella took the cue from some footballers and tried the dark art of time-wasting. Kohli and pacer Mohammed Shami were having none of it and blasted Dickwella for his time-wasting antics. Kohli was visibly furious and was seen angrily gesticulating at the umpires.

Nigel Llong finally got Dickwella and Kohli together, had a chat with the two and calmed things down before the situation could boil over.

Former Sri Lanka captain Mahela Jayawardene took to Twitter to laud Dickwella's antics had words of praise for the Indian skipper as well and a certain Virat Kohli even replied to it.

Enjoyed @NiroshanDikka attitude and antics this afternoon. Good test match.. well played @imVkohli. Looking forward to the next one.????

Yes, test cricket at it's best. Onto the next one now.

Kohli smashed a scintillating century, his 18th in Tests and 50th overall in international cricket, as India set Sri Lanka a 231-run target to win.

Sri Lanka were 62 for four when Dickwella took his time-wasting tactics too far and left Kohli fuming.

Sri Lanka only had a bit more than two hours to negotiate and they almost faltered. They huffed and puffed and somehow survived.

In the end, Sri Lanka were reduced to 75 for seven when bad light came to their rescue.

Comments
Topics mentioned in this article
India Cricket Team Sri Lanka Cricket Team Virat Kohli Mohammed Shami Niroshan Dickwella India vs Sri Lanka 2017-18 Cricket
Get the latest Cricket news, check out the India cricket schedule, Cricket live score . Like us on Facebook or follow us on Twitter for more sports updates. You can also download the NDTV Cricket app for Android or iOS.