He has led Mumbai Indians to IPL treble but this stint has made Rohit realise how tough it is to captain the national team with te burden of expectations from billions of people. 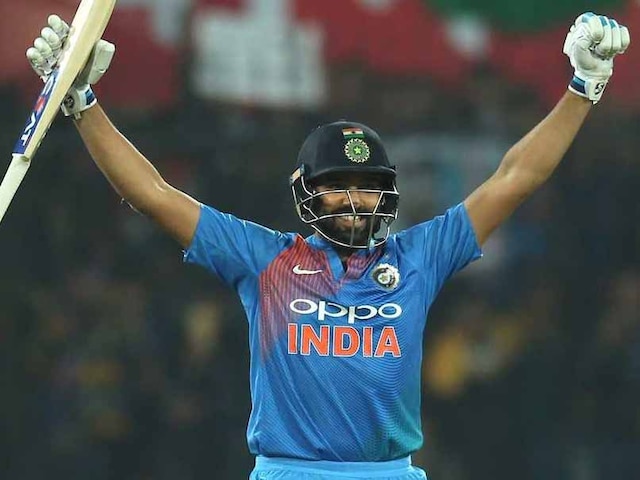 Rohit Sharma wants to savour every moment of his brief stint as India captain, wondering when he would again get a chance to walk out with the team sheet in future. Rohit's brief tenure as stand-in captain will come to an end with the final T20 International against Sri Lanka on Sunday as Virat Kohli will be back in the hot seat for the South Africa tour after a month-long break.

"Since I am leading the side for the first time, there was pressure and there will be pressure when we play next match in Mumbai. I don't know when will I captain the side again, so every minute spent on ground is important for me," a pragmatic Rohit said after hitting the record equalling 35-ball hundred in the second T20 International against Sri Lanka.

He has led Mumbai Indians to IPL treble but this stint has made Rohit realise how tough it is to captain the national team with te burden of expectations from billions of people.

"There is lot of pressure, especially after first match in Dharamsala. We were in such a position that we were on the verge of getting all out on our lowest score," he said.

"I thought a lot about my captaincy and team and that it is very difficult. We are representing 140 crore people and there is lot of pressure of that," he said.

It's not brute power but sublime timing with which Rohit produces his big hundreds and his the ability to play according to the field has been the key to his batting.

"I definitely don't have so much power. I rely a lot on timing the ball more than anything else. I know what my strengths are as well as my weaknesses. I try to play to the field as much as I can, to be honest," said Rohit.

He clears the boundary ropes with consummate ease, in complete contrast to modern day's aggressive batsmen such as Chris Gayle, who rely on power hitting.

Yet he is the only batsman, who has three double hundreds in ODIs and now two in the Twenty20 format.

Asked if he makes any technical adjustment to hit the big shots, Rohit explained his strategy.

"The field is spread after six overs. I try and see where I can find my boundary options. It's important to be able to play with the field," he said.

"I want to score all around the park and not just one area. It's important to explore the fielding the opposition keeps for me.

"In all formats, I try to do that. You can't just hit in one area, you become predictable then. It's always important to score runs all over the field and that's my strength."

The way he was mauling the Lankan attack, a double hundred in T20 was a possibility. However, Rohit said he did not think of double century.

During his sensational 118-run knock off just 43 balls, Rohit hit 10 sixes and 12 boundaries.

Asked if he surprised himself with any one particular shot, Rohit replied in a negative.

"I don't play any of those flamboyant shots. I just try to hit the ball in the area I look to hit. All the shots please me since it takes a lot to pull that off," he said.

"Even when you defend you should like that as well. It's not just about hitting boundaries and sixes even the ball hit in the gap should make you more happy," he said.

Comments
Topics mentioned in this article
India Cricket Team Sri Lanka Cricket Team Cricket Rohit Sharma India vs Sri Lanka 2017-18
Get the latest Cricket news, check out the India cricket schedule, Cricket live score . Like us on Facebook or follow us on Twitter for more sports updates. You can also download the NDTV Cricket app for Android or iOS.