IND vs SA: In a rather unusual turn of events, a snake stopped play during the second T20I between India and South Africa in Guwahati. 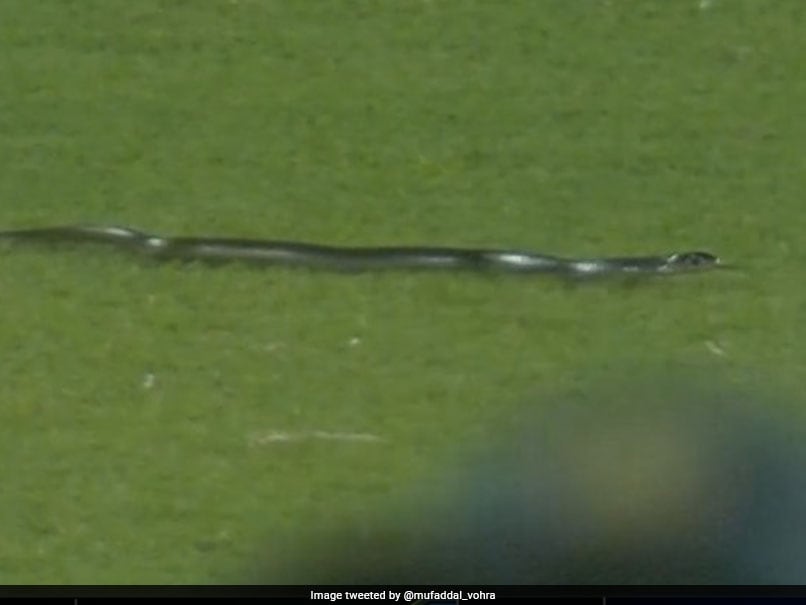 IND vs SA: A snake slithered into the Barsapara Stadium during the 2nd T20I.© Twitter

In one of the most bizarre incidents on a cricket pitch in recent times, the second T20I between India and South Africa at the Barsapara Stadium was interrupted after a snake entered the ground. Yes, you read that right! After the seventh over of India's innings was completed, players spotted a snake on the pitch and play came to a halt. It was Wayne Parnell who spotted the snake and as the play stopped, KL Rahul and Quinton de Kock were seen having a chat. Groundstaff eventually ran in with sticks and a bucket and took the snake out of the field.

"I have so many questions," he tweeted, with a snake emoji.

I have so many questions .

The interruption was a minor blip in what turned out to be a thrilling run-fest.

India ended up winning by 16 runs to take an unassailable 2-0 lead in the series, but not before South Africa gave them a mighty scare.

KL Rahul and Rohit Sharma put on a 96-run opening stand before the India skipper fell for 43(37).

While Rohit was struggling slightly, especially after suffering a blow to his finger, Rahul was in destructive mood, smashing 57 off 28 deliveries before he was out in the 12th over.

But Rahul's stunning knock turned out to be just the trailer, as Suryakumar Yadav brought out the real blockbuster hits, smashing 61 off just 22 deliveries and getting out only due to a mix-up with Virat Kohli.

Kohli himself went on to finish unbeaten on 49 off 28 deliveries, while Dinesh Karthik helped finish things off, hitting 17 off 7 as India posted 237/3.

South Africa were off to a poor start, with Deepak Chahar starting wtih a maiden and Arshdeep Singh then taking two wickets off the next over.

Aiden Markram gave the Proteas some momentum with his 19-ball 33, but when Axar Patel cleaned him up, it looked like India had the match in the bag.

But David Miller came out and settled down quickly before going all guns blazing and a struggling Quinton de Kock also found his touch to take South Africa close to a miraculous chase.

However, the total eventually proved to be too big, and despite Miller hitting a magnificent 46-ball century and de Kock finishing with 69 off 48, India managed to restrict them to 221/3.

South Africa Cricket Team India vs South Africa, 2nd T20I Cricket
Get the latest updates on Fifa Worldcup 2022 and check out  Fifa World Cup Schedule, Stats and Live Cricket Score. Like us on Facebook or follow us on Twitter for more sports updates. You can also download the NDTV Cricket app for Android or iOS.