India vs South Africa: 'Nobody Wants to Block Everything', Hashim Amla Defends Strategy

South Africa captain Hashim Amla along with other South African batsmen took an ultra-defensive approach in the second innings of the fouth Test. Though they delayed the defeat with it, the Proteas could not avoid it 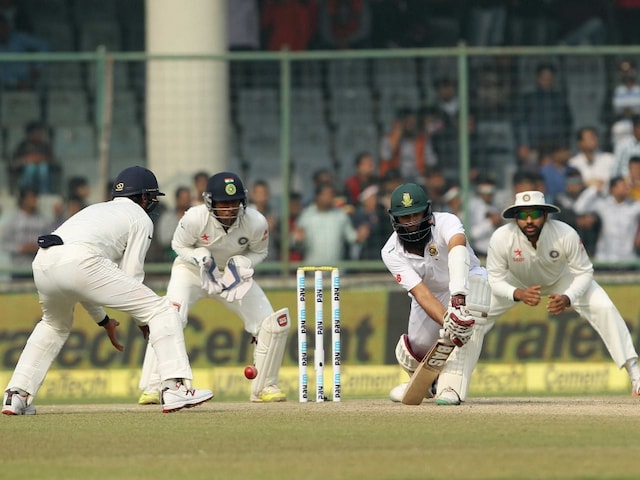 South African skipper Hashim Amla on Monday justified his side's defensive strategy in the fourth and final cricket Test against India, stating that "no team wants to block half volleys" but the situation warranted that risky shots be taken out of equation. (India Conquer South Africa at Kotla; Ravichandran Ashwin, Umesh Yadav Help Win Series 3-0)

"As I mentioned, nobody wants to block everything. You want to score runs," the skipper said at the press conference at the end of the four-match series which South Africa lost 0-3. (South Africa Lost Series Against India in Dressing Room: Sunil Gavaskar)

The Proteas, set a target of 481 in the fourth Test, batted with extreme caution to save the game but were eventually bowled out for 143.

"...the need of the time was to try and bat as long as we can. To try and take the risky shots out of the equation. It is quite difficult to block full tosses and half-volleys," the Proteas skipper said.

"It is quite unnatural for batting. But when it is done, you kind of appreciate the determination shown as AB (de Villiers) was a prime example. Try and knuckle down for the team's sake and be unselfish," he said.

The captain said they had belief that they could save the match like they did in Adelaide, against Australia, three years back.

"We definitely believed it could happen. Till lunch time, we were 3 down, definitely we believed we could do it. We knew the last session and the last hour was always going to be difficult. You lose one or two wickets, difficult for 8,9 10 to hang in there.

"We tried our best. AB de Villiers did an exceptional job in trying to hold it together for us but unfortunately we couldn't get it to as deep as we would have wanted," he added.

Amla admitted that had the target been less than 481, they would have gone for it. "If you asked few of the guys here, if we could get 480, I don't think many would have put their hands up. It is a pretty big, daunting target especially if you weigh it up with five sessions to bat. Having come close to that in the past, we felt that it was the best way to try and save the game for us," he added.

About positives from the tour, in which the Proteas won the limited-overs matches, Amla said there were many. "Our bowling has been exceptional. For me the shining light was seeing Morne lead the attack in absence of Dale. He was exceptional. The way (Kyle) Abbott came and got five-for. The bowlers responded well before the England series," he said.

Amla also conceded that he did not have a great series despite batting out of his skin in trying to save the Test. "As a captain, you always want to lead from the front. First I am a captain then a batsman or the other way around. Either way you want to score runs. Not being able to score runs in the series certainly was disappointing for me.

"As a batting unit, we didn't manage to get the runs on the board. 2010 was a wonderful year for me when I was here. But sometimes cricket goes that way. I am not going to look too deep into it. I will maintain my same training to keep getting better that's the way I am looking to go," he concluded.

Comments
Topics mentioned in this article
Hashim Amla South Africa in India Series, 2015 Cricket
Get the latest Cricket news, check out the India cricket schedule, Cricket live score . Like us on Facebook or follow us on Twitter for more sports updates. You can also download the NDTV Cricket app for Android or iOS.