Ajinkya Rahane's perfect balance and technique in such short career is unique in cricket, according to India captain Virat Kohli 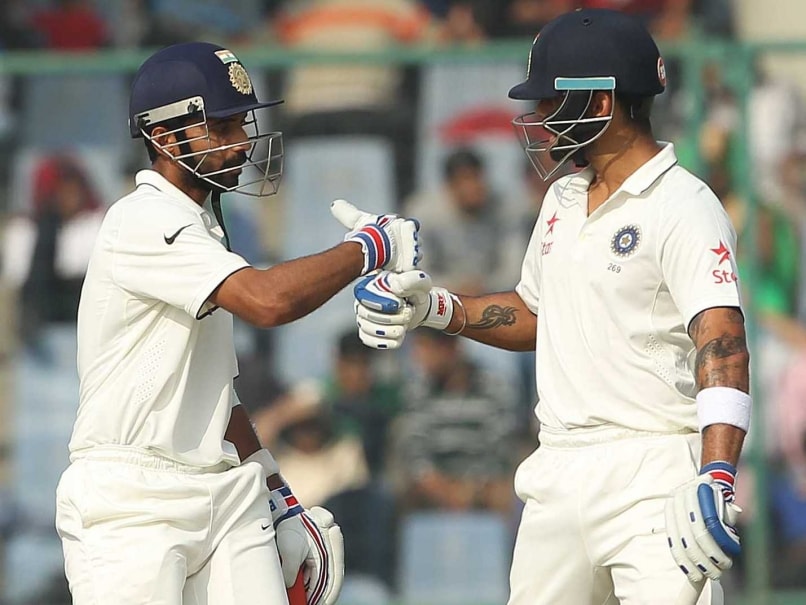 India Test captain Virat Kohli on Monday hailed 'Man of the Match' Ajinkya Rahane, terming him as one with rare qualities of "intent backed by solid technique". (Ajinkya Rahane, India's 'Most Complete', Bats His Way Into Record Books)

The skipper shared a 154-run fifth wicket stand with Rahane and said batting with the Mumbaikar was more satisfying than his own knock of 88. Rahane also became the fifth Indian batsman to score a century in both innings of a Test as he scored - 127 and 100*. (India Conquer South Africa at Kotla; Win Series 3-0)

"I enjoy batting with him (Rahane). We had some really good partnerships in the past as well. What I like about him is that his intent is really good backed by solid technique, which is a rare balance. To find that balance early in the career is a commendable effort," Kohli said. (Ajinkya Rahane Dedicates Historic Series Victory to Chennai Flood Victims and Indian Army)

"He has played some very important knocks for us in the last couple of years. Because of that, he is probably one of the most important people in our middle order. He is just growing in stature and confidence. I enjoyed batting more with him than me getting to 80 plus score, because partnerships are something we aim for. We hadn't got a 100-run stand, we wanted to string in a good one. We communicated well," said the captain.

For him, the stand with Rahane would now be an example of how to bat and wriggle out of crunch situations.

"It was 57/4 and if you lose another wicket, then target will be around 300-315, which is a tricky total with two days to go. We had a discussion that although we are up in the series, we still need to enjoy and learn from this situation for future games. I told him that 'if me and you bat through this situation and build a big partnership, that will give us confidence in doing that in crunch games as well, that we need to do that thing'," revealed Kohli.

Comments
Topics mentioned in this article
Virat Kohli Ajinkya Rahane South Africa in India Series, 2015 Cricket
Get the latest updates on IPL Auction 2023 and check out  IPL 2023 and Live Cricket Score. Like us on Facebook or follow us on Twitter for more sports updates. You can also download the NDTV Cricket app for Android or iOS.