India vs England: Rohit Sharma remained unbeaten on 57 as India ended Day 1 of third Test on 99 for 3 in reply to England's 112 all out on Wednesday. 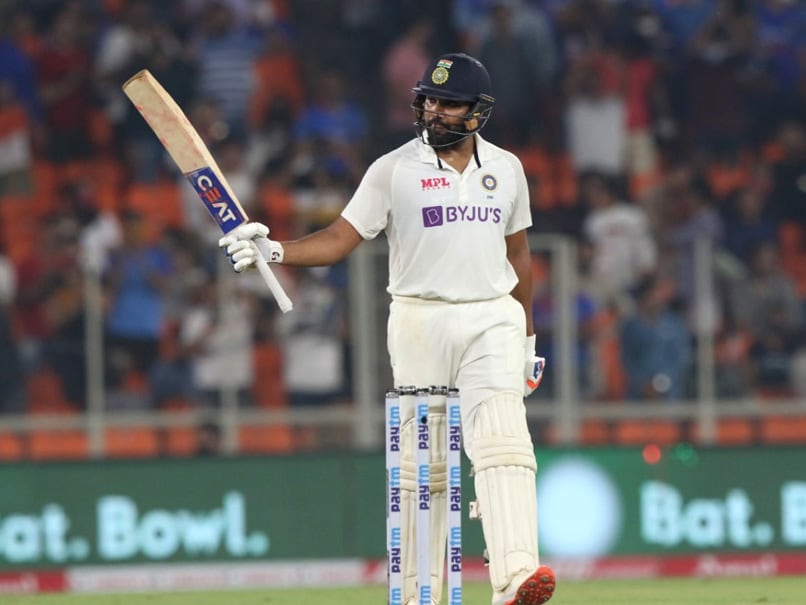 Axar Patel's devastating six-wicket haul bundled England out for 112 before Rohit Sharma's languid elegance shone through in an unbeaten half century that handed India the edge on the opening day of the day-night third Test in Ahmedabad on Wednesday. The spin combination of left-armer Patel and off-spinner Ravichandran Ashwin exploited the turning Motera pitch at the newly-inaugurated Narendra Modi Stadium to the full and England's first innings folded in just 48.4 overs after the visitors opted to bat. Patel (21.4-6-38-6) grabbed his second five-for in his second Test while Ashwin (16-6-26-3) took three. At Stumps, India were 99 for 3 from 33 overs with Rohit batting on 57 off 82 balls. Ajinkya Rahane (1) was giving him company following skipper Virat Kohli's dimissal in the second last over of the day.

Before this, it was a nightmare that unfolded for England with the 47-run stand for the third wicket being their best.

They lost their last six wickets in the second session. The last seven wickets yielded just 38 runs.
This was after Ishant Sharma, only the second Indian fast bowler after Kapil Dev to play in 100 Tests, fittingly took India's first wicket in the third over to open the floodgates for the hosts.

He was accorded a guard of honour by his teammates after being felicitated by President Ram Nath Kovind and Home Minister Amit Shah ahead of his landmark game.

In reply to a below par score, India negotiated the opening spells of much-vaunted England seamers James Anderson and Stuart Broad without any damage in the tricky twilight period. Rohit and Shubman Gill (11) did not face too much trouble seeing out the precarious phase.

Anderson and Broad did not get much the desired movement with the pink ball and the dew factor did not have a big role either.

But Jofra Archer (5-2-24-1) gave England the breakthrough in the 15th over with Gill, trying a pull shot from the off stump, top-edged for Zak Crawley to end the 33-run opening partnership.

India lost another wicket soon after in Cheteshwar Pujara with Leach getting him trapped LBW for a first-ball duck to reduce India to 34 for 2.

After that, Rohit and Virat shared 64 runs for the third wicket, rotating the strike and finding the gaps as well for regular boundaries. Kohli was dropped by Ollie Pope when he was on 24. Pope also put down a difficult chance to dismiss Rohit when the batsman was on 52.

Earlier, after Ishant had taken the first wicket, it was an Ashwin and Patel show as the duo bamboozled the England batsmen to complete the submission. Crawley (53 off 84 balls) was the lone exception and hit a delectable half-century.

Crawley's brilliance was, however, neutralised by the Indian spinners as England were left reeling at 81 for 4 going into Tea after an exciting opening session.

Two wickets fell in as many overs after the resumption of the second session, with Ashwin and Patel taking one each, to reduce England to 81 for 6.

Ashwin sent Pope's (1) off-stump cart-wheeling with a beauty of a delivery, bowling round the wicket, before Patel trapped Ben Stokes (6) LBW in the next over with a ball that spun in.

Jofra Archer (11) did a tad better as he hit a four off the second ball he faced and another boundary off Ashwin. But Patel dismissed him soon, cleaning up his off-stump to send England innings into a mess.

England's rapid slide continued with Jack Leach edging one to the gully where Cheteshwar Pujara took a low catch off Ashwin, though the TV umpire took time to confirm the decision.

Crawley's effort was the only silver lining for England. Having missed the first two Tests due to a freak wrist injury, the stylish right-hander's driving was elegance personified as he hit 10 boundaries during his innings.

Captain Joe Root was the second highest scorer for England with a 37-ball 17 before he was dismissed by Ashwin.

Ravichandran Ashwin Zak Crawley Jack Leach India vs England 2020-21 India vs England, 3rd Test Cricket
Get the latest updates on Fifa Worldcup 2022 and check out  Fifa World Cup Schedule, Stats and Live Cricket Score. Like us on Facebook or follow us on Twitter for more sports updates. You can also download the NDTV Cricket app for Android or iOS.