India vs England: Fast bowler Ishant Sharma was presented with mementos by President Ram Nath Kovind and Home Minister Amit Shah on Wednesday as the pacer played his 100th Test. 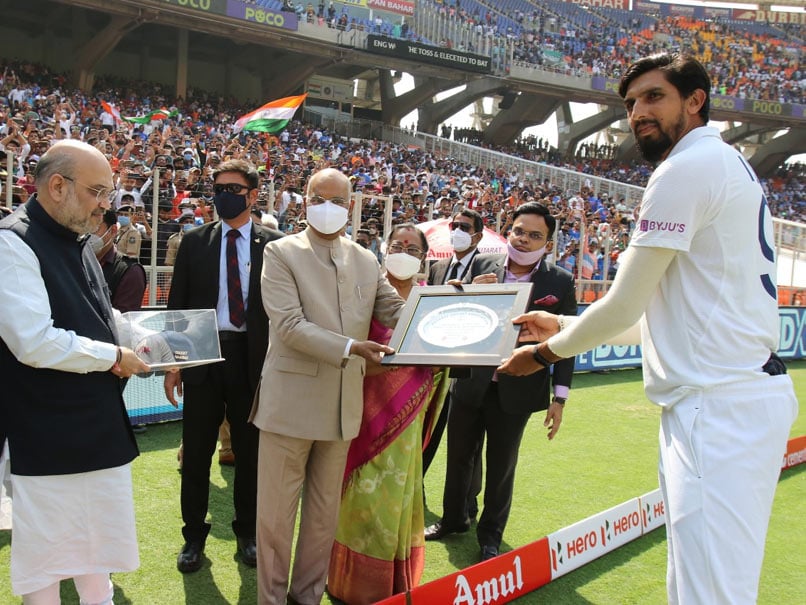 IND vs ENG: Ishant Sharma was felicitated by President Ram Nath Kovind ahead of his 100th Test.© BCCI

India fast bowler Ishant Sharma, who played his 100th Test today, was felicitated by President Ram Nath Kovind and Home Minister Amit Shah before the start of play in the third Test between India and England in Ahmedabad. The Board of Control for Cricket in India (BCCI) posted a video on social media where President Kovind is seen presenting Ishant with a memento to mark the occasion followed by Amit Shah presenting the pacer with another - a cap to mark his 100th Test appearance. Ishant, 32, is the most capped Test player in the Indian squad for this Test and he has 303 wickets to his name.

After commemorating Ishant on this milestone, President Kovind and Amit Shah met all members of the Indian squad as captain Virat Kohli did the introductions on the team's behalf.

The introductions were socially-distanced as the players greeted the dignitaries from a distance with folded hands even as President Kovind and Amit Shah walked along the boundary line outside the field of play.

The four-match series is tied 1-1 at this stage and the final two Tests will be played in Ahmedabad at the Sardar Patel Stadium in Motera that was rechristened as Narendra Modi Stadium, named after the Prime Minister of India, ahead of this match.

Ishant, who made his Test debut in 2007, crossed the milestone of 300 Test wickets in the first Test in Chennai.

He became only the third Indian pacer after Kapil Dev and Zaheer Khan to take more than 300 wickets.

Ishant Sharma India vs England 2020-21 India vs England, 3rd Test Cricket
Get the latest updates on Fifa Worldcup 2022 and check out  Fifa World Cup Schedule, Stats and Live Cricket Score. Like us on Facebook or follow us on Twitter for more sports updates. You can also download the NDTV Cricket app for Android or iOS.