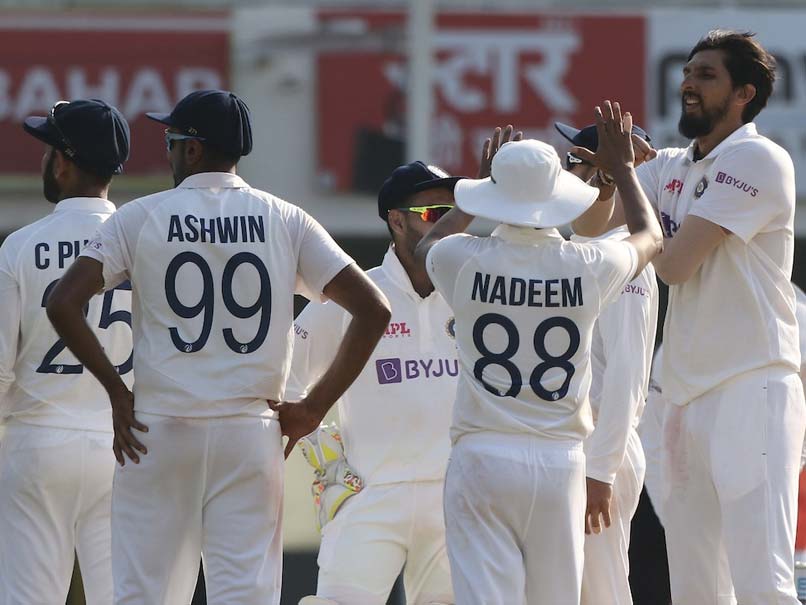 Ishant Sharma became only the third Indian fast bowler to take 300 Test wickets after dismissing England batsman Daniel Lawrence in the ongoing first Test at the MA Chidambram Stadium on Monday. Kapil Dev and Zaheer Khan are the two pacers ahead of him, with 434 and 311 wickets, respectively. Anil Kumble is the highest wicket-taker for India in Tests with 619 dismissals to his name. Ishant, who returned to the playing XI after missing the Australia tour due to injury, has looked in fine form. In England's first innings, the lanky pacer took two wickets, giving away just 52 runs off 27 overs.

On Monday, the 32-year-old didn't have the chance to bowl with the new ball with captain Virat Kohli opting to go with Ravichandran Ashwin and Shahbaz Nadeem. But after being brought into the attack, Ishant struck in his second over, trapping Lawrence plumb in front of the stumps for his 300th Test scalp.

Harbhajan Singh and current teammate Ravichandran Ashwin are the other bowlers ahead of Ishant in the top wicket-takers' list for India.

Ishant hadn't played an international match for nearly a year before the ongoing Test against England in Chennai.

With young pacer Mohammed Siraj impressing during India's historic Test series win in Australia, Ishant had stiff competition to get into the playing XI. But the Indian team management put faith in the veteran pacer and he repaid with two wickets on a placid batting track in England's first innings.

After a slow start where he failed to find his best rhythm in his first spell, Ishant bowled brilliantly thereafter causing a few problems for even Joe Root. His first wicket came in the 170th over, knocking over Jos Buttler, who for some reason decided to not to offer a shot to an in-dipping delivery.

Ishant didn't have to wait much long for his second, as Jofra Archer was castled on the very next ball.

Zaheer Khan Cricket India vs England, 1st Test Anil Kumble
Get the latest updates on IPL Auction 2023 and check out  IPL 2023 and Live Cricket Score. Like us on Facebook or follow us on Twitter for more sports updates. You can also download the NDTV Cricket app for Android or iOS.