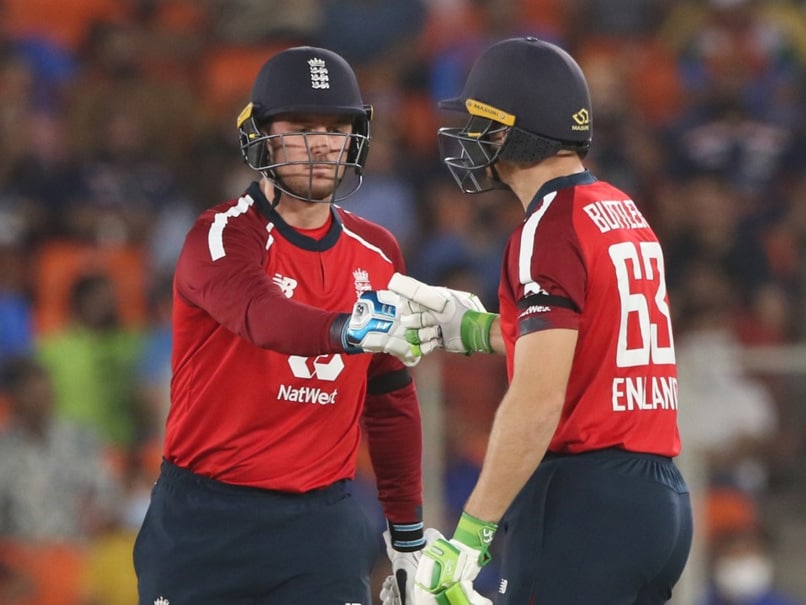 Indian batsmen had little to offer in the face of a regimented English bowling effort on a two-paced track as the hosts received an eight-wicket hammering in the opening Twenty20 International in Ahmedabad on Friday. Indian batsmen struggled to score freely before Shreyas Iyer showed the way with a dogged 67-run knock that took Virat Kohli's men to 124 for 7 at the the Narendra Modi stadium. The home team could only manage 124 and in the absence of scoreboard pressure, England overhauled the target with ease in 15.3 overs to take a 1-0 lead in the five-match series.

The Indian batsmen never got the momentum going as England's pace-heavy attack, led by Mark Wood, used the extra bounce effectively to trouble them.

Most of the Indian batsmen went for flashy shots when placement would have served them well, as Iyer did later in the innings.

Jason Roy scored a well-calculated 49-run knock while Jonny Bairstow's big hits showed there were no demons in the pitch as the Indians made it seem after being invited to bat by England skipper Eoin Morgan.

Roy struck the ball clean and hard to form a 72-run opening wicket stand with Jos Buttler (28), ending any hopes that the Indians harboured of getting back in the game.

The luxury of time allowed the England batsmen to play freely. None of the Indian bowlers looked like asking tough questions to the visitors.

Roy was trapped by Washington Sundar but by that time England had put 89 runs on the board.

Bairstow (26) and Dawid Malan (24) took the side past the finish line.

Earlier, after India's top-order was blown away, Iyer gauged the nature of the pitch quickly and adjusted his game accordingly, playing a sensible innings that helped them cross the 100-run mark.

Laced with eight boundaries and a six, and coming off 48 balls, it was Iyer's best T20 knock. He fell in the last over.

England surprised India by opening the attack with leg-spinner Adil Rashid, who was not only economical but also dismissed Kohli (0) after KL Rahul (1) dragged one back onto his stumps from Jofra Archer (3/23).

Feeling the heat, Shikhar Dhawan, who got the opportunity since Rohit Sharma was rested, attempted to break the shackles with a flashy shot off Wood but completely missed the line to see his timber disturbed.

In-form batsman Rishabh Pant (21) was promoted to number four. He struck the ball clean, which included a reverse-flick off Archer for a six, but the England bowlers kept it tight.

The home team was tottering at 34 for three in eight overs. Pant and Iyer added 28 runs for the fourth wicket before the former hit one straight to Bairstow off Ben Stokes.

That brought Hardik Pandya to the crease, who true to his style, looked for some big hits but could not do much.

Eoin Morgan India vs England 2020-21 India vs England, 1st T20I Cricket
Get the latest updates on Fifa Worldcup 2022 and check out  Fifa World Cup Schedule, Stats and Live Cricket Score. Like us on Facebook or follow us on Twitter for more sports updates. You can also download the NDTV Cricket app for Android or iOS.