India were reeling at 63/4 when Kedar Jadhav came on to the crease. He hit a quickfire ton off 65 balls with 11 fours and 2 sixes. 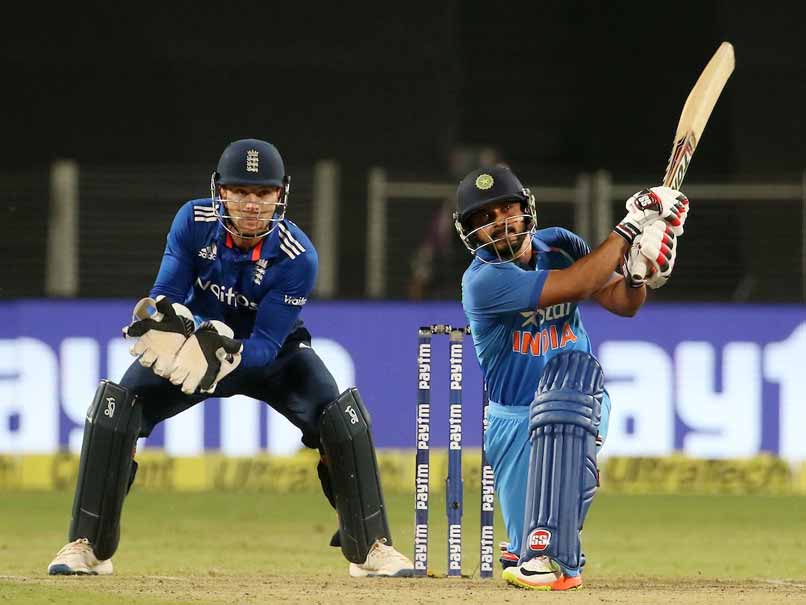 Kedar Jadhavon Sunday smashed the second century of his One-Day International career to orchestrate India's reply along with skipper Virat Kohli in the first of the three-match series at the Maharashtra Cricket Association Stadium in Pune. Chasing a mammoth total of 351 runs, India started off poorly with Shikhar Dhawan and Lokesh Rahul going early in quick succession. Coming at No. 4, Yuvraj Singh got a good start but could not convert it into a big score. MS Dhoni, who was playing as a wicket keeper-batsman, also played a rash shot and got out on 6.

India were reeling at 63/4 when Jadhav came on to the crease, only to play positive cricket right from the start of his innings. He hit the quickfire ton off only 65 balls with 11 fours and 2 sixes which became the fifth fastest ODI century by an Indian. His innings ended on 120 in 76 balls.

Not only with the bat, Jadhav also contributed with the ball by delivering four crucial overs for 23 runs.

Earlier, India had picked Jadhav for the ODI series against New Zealand on the strength of his batting numbers in domestic cricket. In the Quadrangular A-team one-day series in Australia, he scored 254 runs at 63.50, finishing as the tournament's fourth-highest run-getter.

Against New Zealand too, he had played few handy knocks and contributed to the comprehensive series victory by India.

MS Dhoni's decision to throw the ball to Jadhav in Dharamsala against New Zealand wasn't surprising in itself; he had spent a long time bowling off-spin in the nets under coach Anil Kumble's supervision on the eve of the game. It was his immediate success that made heads turn.

The 31-year-old had scored his maiden century against Zimbabwe in the fourth ODI of his career in Harare.

Comments
Topics mentioned in this article
India Cricket Team England Cricket Team Kedar Jadhav Yuvraj Singh Virat Kohli MS Dhoni Cricket India vs England 2016-17
Get the latest updates on Fifa Worldcup 2022 and check out  Fifa World Cup Schedule, Stats and Live Cricket Score. Like us on Facebook or follow us on Twitter for more sports updates. You can also download the NDTV Cricket app for Android or iOS.