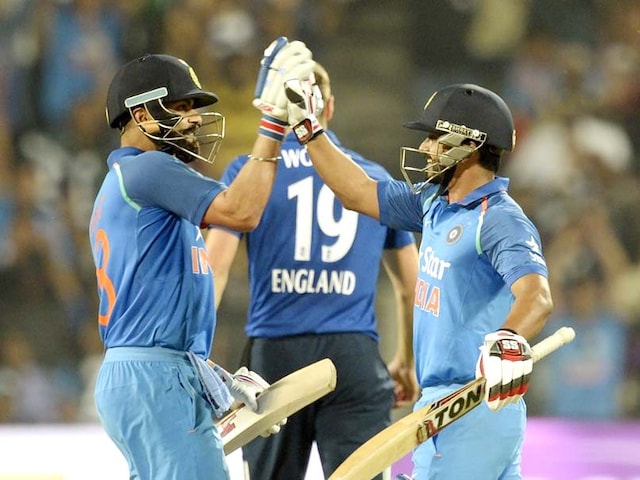 Virat Kohli and Kedar Jadhav strung together a 200-run partnership for India.© AFP

India secured an improbable three-wicket win in the 1st ODI against England in Pune on Sunday, following centuries from Virat Kohli and Kedar Jadhav. Skipper Kohli scored a composed 122-run knock, and combined with Kedar Jadhav, who scored 120 runs, as India chased down the 351-run target set by the visitors, their second highest successful run chase and fourth overall in ODI history. Kohli and Jadhav got together for a 200-run partnership after the hosts had lost four early wickets.

Responding to England's score of 350/7, India lost openers Shikhar Dhawan and KL Rahul early on. Yuvraj Singh started off well, but was dismissed for just 15 runs.

MS Dhoni, playing his first ODI match since resigning as captain, fell for six, and India suddenly found themselves with a mountain the climb, the hosts' scorecard reading 63/4 at that point.

However, Kohli and Jadhav steadied the Indian innings after Dhoni's wicket. While Jadhav immediately got down to business with some big shots, Kohli helped keep the score ticking with the odd boundary once in a while.

The two strung together a 200-run partnership before Kohli fell for 122. Jadhav was dismissed for 120 a few overs later. However, Hardik Pandya's cameo towards the end helped India get over the line and seal a three-wicket win. Ravichandran Ashwin finished things off with a six as India's score read 356/7 from 48.1 overs. Pandya remained unbeaten on 40.

" This win will take a while to sink in," Virat Kohli said after the match.

Although, Virat scored more than Jadhav, but the latter was awarded the Man of the Match considering his brilliant innings under pressure.

"Kedar Jadhav's innings was very calculative and I was in awe with some of the shots he played," the Indian skipper said.

Earlier, Joe Root and Jason Roy scored 78 and 73, respectively, while Ben Stokes chipped in with a brisk 62-run knock in the late overs as England posted a mammoth total of 350/7.

The visitors pounced on some wayward bowling from the hosts and added 115 runs in the final 10 overs to put themselves in charge of the match. Hardik Pandya was India's most successful bowler, as he picked up two wickets in nine overs and conceded 46 runs.

After losing the toss and being put in to bat by India, England lost Alex Hales early on to a run out. However, Roy and Root combined to steady the visitors' innings.

Roy was stumped by Dhoni from a Ravindra Jadeja delivery, but Root's 78 put England in course for a huge total. Skipper Eoin Morgan scored 28 runs, while Jos Buttler was dismissed for 31. Both fell to deliveries from Pandya.

It was Ben Stokes' knock, a quickfire 62 from just 40 balls, that helped the Englishmen cross the 300-run mark with ease. Moeen Ali too contributed with 28 runs as England finished their 50 overs at a commanding total.

Jadeja was India's most economic bowler, with the spinner conceding 50 runs from his 10 overs. Umesh Yadav, Jasprit Bumrah and Ravichandran Ashwin, on the other hand, had a forgettable day in office. The trio conceded a combined total of 205 runs from just 25 overs.

Bumrah and Umesh, however, did pick two and one wicket each towards the end of England's innings, while Ashwin finished wicketless.

With the loss, England have now just two wins to their name in the last 19 matches against India in India.