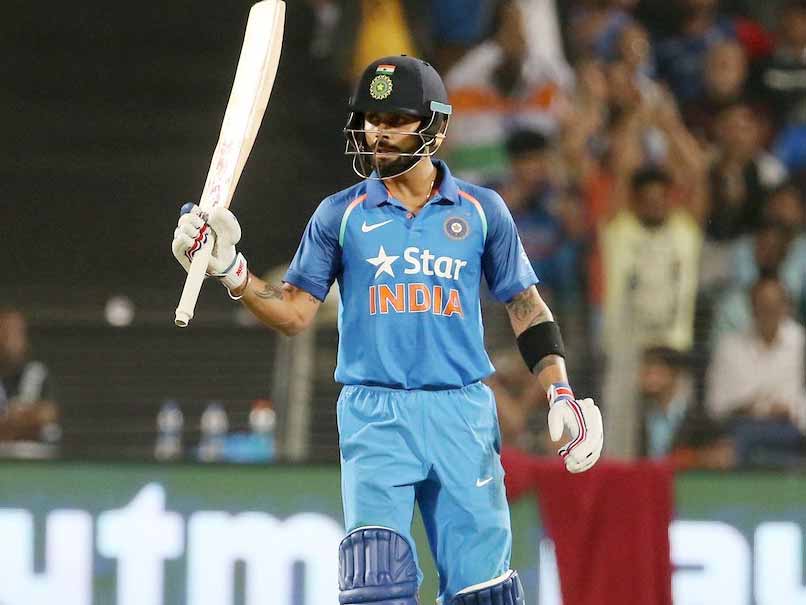 Virat Kohli's batting exploits took the cricketing world by storm in 2016, with the Indian batting talisman consistently hitting top form in all formats of the game throughout the year. The new year has seen new responsibilities being handed over to Kohli, with him taking over India's ODI and T20I captaincy from MS Dhoni, having already served as the country's Test captain for over a couple of years.

However, the added burden of being the captain doesn't seem to have affected Kohli's prolific batting form, as his spectacular century on Sunday powered India to a three-wicket win in the first ODI, his first limited-over game as skipper.

After being set a mammoth target of 351 runs by England during the 1st ODI in Pune on Sunday, the Indian side found itself in deep trouble after losing four wickets at a score of 63.

Virat Kohli, who had come in at no. 3, however, kept his cool and combined with Kedar Jadhav, who scored a 120-run knock, to pull India out of a difficult spot. Jadhav was eventually adjudged the Man of the Match.

Kohli put his vast array of shots on display, and in a composed, well-calculated innings, helped the Indian team bounce back into the match.

He completed his fifty in 44 balls and crucially kept the score ticking with Jadhav as India continued their audacious chase.

The Indian captain reached his century, his 27th ton in ODI cricket, in the 32nd over with a huge six as India took charge of the 1st ODI in Pune.

He was eventually dismissed for a score of 122 from a Ben Stokes delivery, but India went on to clinch a three-wicket win with 11 balls to spare.

"The only way we could have come out of this was to counterattack. We couldn't win with those singles. We needed to tell the opposition that we believe we can win," Kohli said following the win.

"Conceding 350, being 60 for 4, their bowlers on top, it took a special partnership to get this win. We have seen the potential of Kedar before. And Hardik finishing in the end. Two cool heads with Ashwin in the middle," he added.

"The moment I saw Kedar striking well, I told him let's get to 150 for 4, and they will hit the panic button. Just you watch. A splendid innings. Yes I did push him hard for running," Kohli stated.

Kohli has also equalled Tendulkar's record of scoring a total of 17 centuries during a chase. The cricketer from Delhi, however, has taken just 96 innings to reach the feat, compared to Tendulkar's 232.

Hardik Pandya and Jasprit Bumrah both picked up a couple of wickets each, while Umesh Yadav and Ravindra Jadeja both grabbed one wicket each.

Comments
Topics mentioned in this article
Cricket India Cricket Team England Cricket Team Virat Kohli Kedar Jadhav MS Dhoni India vs England 2016-17
Get the latest updates on Fifa Worldcup 2022 and check out  Fifa World Cup Schedule, Stats and Live Cricket Score. Like us on Facebook or follow us on Twitter for more sports updates. You can also download the NDTV Cricket app for Android or iOS.