A video went viral on social media where India captain Virat Kohli can be seen giving autograph to a special fan. 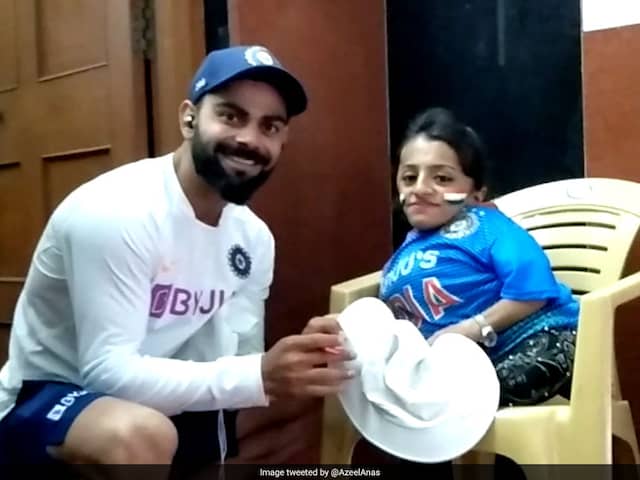 Virat Kohli interacted with a special fan in Indore.© Twitter

Virat Kohli led India to a convincing victory over Bangladesh in the first Test in Indore on Saturday. India defeated the visitors by an innings and 130 runs to go 1-0 up in the two-match Test series. While Virat Kohli was praised for his leadership skills on the field, the India skipper's gesture off the field in Indore left fans in awe of him. A video went viral on social media where Kohli can be seen interacting with a special fan in Indore. In the video, a fan with a disability was waiting to see her sporting heroes but she was left surprised when Virat Kohli came, greeted her and signed an autograph.

Fan moment for 24 yrs old, Pooja Sharma. I don't know her myself but the Authorities at Holkar stadium, Indore were kind enough and allowed her to meet Virat @ViratGang @ViratFanTeam@ViratKohliFC @viratliciousFC#INDvBAN pic.twitter.com/80T0O0vDRZ

This is not the first time when Kohli has taken time out to interact with his fans. The India skipper recently met one of his fans, who had tattooed Virat Kohli's jersey number and achievements on his body.

The India captain interacted with his fan in Vizag during the Test series against South Africa.

In the first Test against Bangladesh, India wrapped up the match inside three days as the visitors were bowled out for 213 in their second innings after being knocked over for 150 on the opening day of the match.

On the field, the 31-year-old batting star failed to contribute with the bat against Bangladesh in the first Test as he was dismissed for a second-ball duck by Abu Jayed on Day 2.

India will now host Bangladesh for their first-ever day-night Test which is scheduled to be played at the Eden Gardens in Kolkata, starting November 22.

Virat Kohli India vs Bangladesh Cricket
Get the latest Cricket news, check out the India cricket schedule, Cricket live score . Like us on Facebook or follow us on Twitter for more sports updates. You can also download the NDTV Cricket app for Android or iOS.