India chased down the target with 15 balls to spare in Bengaluru to clinch the ODI series against Australia. 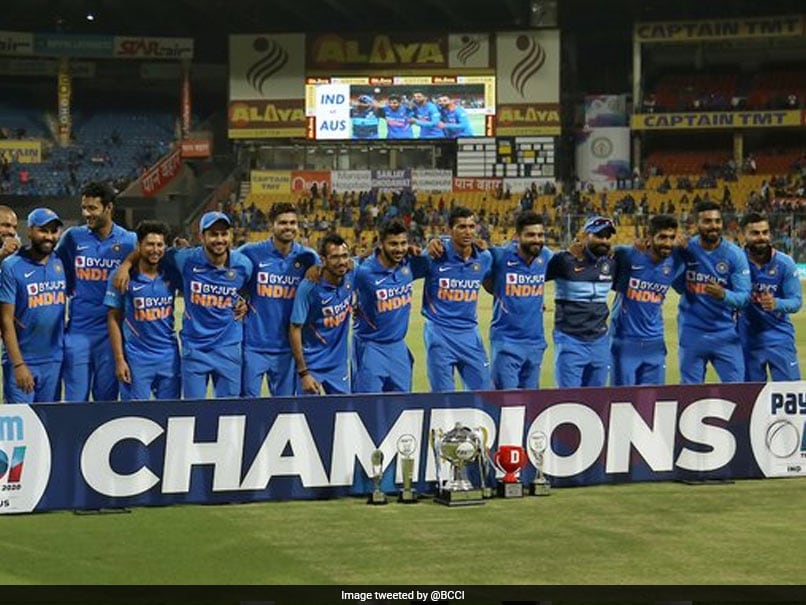 India won the three-match series 2-1 as they beat Australia by 7 wickets in Bengaluru.© Twitter

India outclassed Australia with a commanding seven-wicket win in the third and final One-Day International of the three-match series in Bengaluru on Sunday. After an impressive bowling performance, Indian batsmen Rohit Sharma, Virat Kohli and Shreyas Iyer helped the hosts secure the win with 15 balls to spare at the M Chinnaswamy stadium. Chasing a below-par target of 287, Rohit Sharma top-scored for India as he notched up his 29th century in the 50-over format. Rohit Sharma was well-supported by skipper Virat Kohli who missed out on his 44th ODI hundred by just 11 runs. Once Australia got rid of Rohit Sharma, Shreyas Iyer came out all guns blazing as India cruised to a seven-wicket win.

Earlier, Australia captain Aaron Finch won the toss and chose to bat but his decision backfired as the visitors lost their first wicket in the fourth over as Mohammed Shami removed David Warner.

Marnus Labuschagne then joined Smith in the middle as the duo put on a stand of over 100 runs for the third wicket.

Indian bowlers kept chipping in with wickets at regular intervals as they managed to restrict Australia to 286 for nine in 50 overs.

Mohammed Shami was the pick of the bowlers for the hosts as he returned with figures of four for 63.

For Australia, Josh Hazlewood, Ashton Agar and Adam Zampa all picked up one wicket apiece.

Rohit Sharma India vs Australia 2020 India vs Australia, 3rd ODI Cricket
Get the latest updates on ICC T20 Worldcup 2022 and CWG 2022 check out the Schedule, Live Score and Medals Tally. Like us on Facebook or follow us on Twitter for more sports updates. You can also download the NDTV Cricket app for Android or iOS.