Hardik Pandya, who is not part of the squad for the ODI series against Australia, trained with the Indian team on Monday. 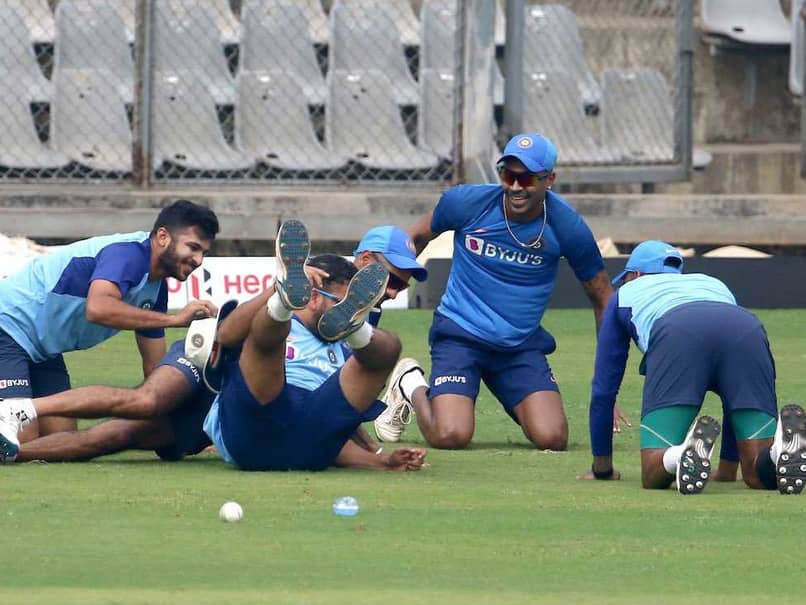 Hardik Pandya trained for the first time with the Indian team since his injury.© Twitter

Hardik Pandya is not part of the India squad for the five-match Twenty20 International (T20I) series as continues his rehabilitation after an injury. The all-rounder, however, trained for the first time with the Indian team since his injury. Team India held a practice session ahead of the first One-Day International (ODI) of the three-match series against the visiting Australia team and Pandya was seen sweating it out with bowling coach Bharat Arun keeping a close eye on him. The 26-year-old took to Twitter and posted pictures of him taking part in the training session and said that he had "missed this amazing feeling".

Back training with the team Missed this amazing feeling pic.twitter.com/S9m9f8p6nT

A BCCI release had mentioned that Hardik Pandya's rehabilitation process is taking "longer than expected".

Vijay Shankar had replaced Pandya in the India A squad for New Zealand shadow tour.

Meanwhile, the Indian team is gearing itself for a tricky contest against the Australians when the three-match ODI series begins at the Wankhede Stadium in Mumbai on Tuesday.

Ahead of the mouth-watering contest much focus has centered around India's opening conundrum.

In Rohit Sharma, KL Rahul and Shikhar Dhawan, India are spoilt for choice at the top of the order, and batting coach Vikram Rathour on Sunday called it a "good dilemma" to have.

Rohit had a phenomenal 2019, having struck five centuries in the World Cup. Dhawan, who made a comeback in the T20I side in the just-concluded three-match series against Sri Lanka, was also among the runs, while Rahul, too, is having a great time with the bat.

"It's a good dilemma to have. Rohit is an obvious choice of course. Both of them (Shikhar and Rahul) are playing well. Shikhar Dhawan has done well in one- dayers and Rahul is in great form. So we'll deal with it when we have to," Rathour said.

The second ODI will be played in Rajkot on January 17 and the third in Bengaluru on January 19.

Hardik Pandya India vs Australia 2020 Cricket
Get the latest updates on IPL 2021, IPL Points Table , IPL Schedule 2021 , live score . Like us on Facebook or follow us on Twitter for more sports updates. You can also download the NDTV Cricket app for Android or iOS.