Shikhar Dhawan was hit on the ribs by a Pat Cummins delivery while batting and was out of action when India fielded. 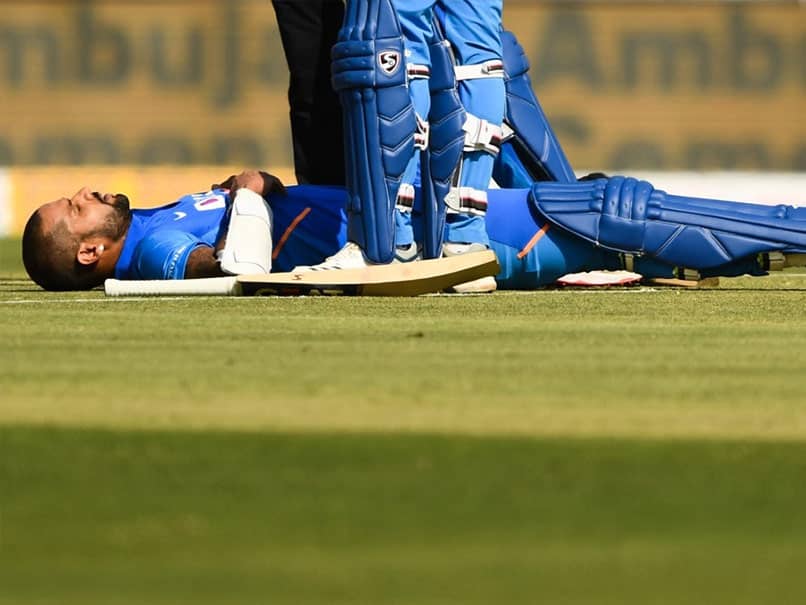 Shikhar Dhawan needed assistance during his knock after being hit by a Pat Cummins short ball.© AFP

Shikhar Dhawan suffered a rib injury when a short ball from Pat Cummins crashed into him during India's inning in the second ODI against Australia in Rajkot. Dhawan did not come out to field due to the injury, the Board of Control of Cricket in India (BCCI) said in an update. Leg-spinner Yuzvendra Chahal was Dhawan's replacement on the field. Dhawan kept going despite his injury and played a fine knock, falling just four runs short of his 18th ODI century.

"Shikhar Dhawan got hit on the rib-cage on his right side. He will not be taking the field today. Yuzvendra Chahal is in as his substitute," BCCI tweeted.

This is the second in-match injury concern that India have faced this series. In the first ODI at the Wankhede Stadium in Mumbai, Rishabh Pant suffered a concussion after top-edging a Pat Cummins short ball into his helmet. Pant was ruled out of the second ODI in Rajkot due to the injury.

Dhawan's 90-ball 96 along with Virat Kohli's 78 and KL Rahul's explosive 80 powered India to 340/6 after the visitors won the toss and chose to field first.

This was Dhawan's second consecutive ODI half-century, having scored 74 in the first match in Mumbai where Australia thrashed the hosts by 10 wickets.

Dhawan came into the series against Australia facing stiff competition from KL Rahul for his place in the team. With Dhawan suffering a spate of injuries in 2019 and Rahul in impressive form, the left-handed opener needed good scores, and with a quick-fire half-century against Sri Lanka in the 3rd T20I to add to his impressive performances against Australia, he has made a good case for himself.