Highlights: Ind vs Aus 1st T20I: Glenn Maxwell was the top-scorer for Australia with 56 runs. 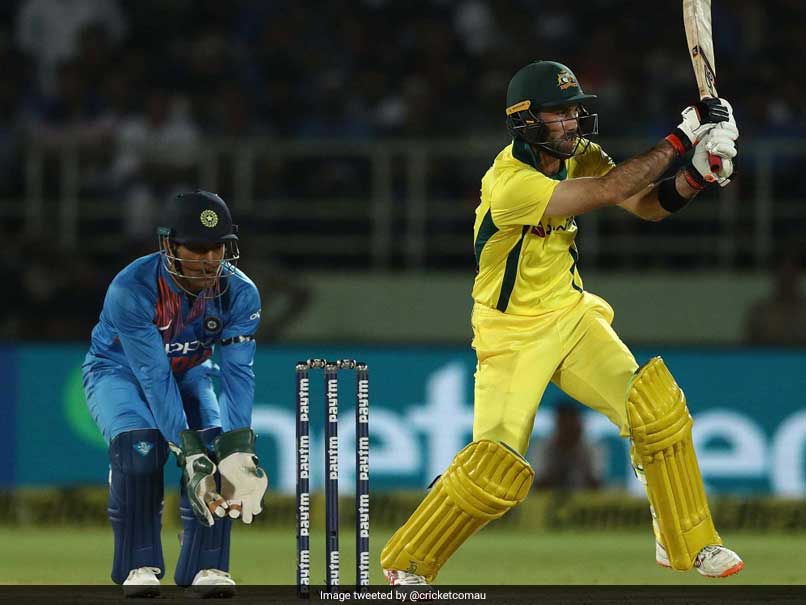 Australia defeated India by three wickets in the opening T20I played in Visakhapatnam on Sunday. Needing two off the final ball, Australia had Pat Cummins to thank for getting them across the line. Needing 14 runs to win in the last over, it was India's game to lose as Umesh Yadav was hit for two boundaries in the last over. Jasprit Bumrah's heroics in the penultimate over went in vain as he gave away just two runs and picked two wickets to bring India back in the match. Glenn Maxwell top-scored for Australia with 56 runs off 43 balls. His innings included six fours and two sixes. Earlier, India stuttered to 126/7 in 20 overs in the first T20 International against Australia. KL Rahul was the top-scorer for India with 50 off 36 balls. MS Dhoni remained unbeaten till the end as he managed 29 runs from 37 balls. Captain Virat Kohli who made his comeback after a brief break from the game, looked good until he got out for 24 runs. Nathan Coulter-Nile was the pick of the bowlers for Australia, taking three wickets for just 26 runs. (SCORECARD)

22.30 IST: Thank you for joining our live coverage of the opening match of the series. Do join us for the 2nd T20I.

22:16 IST: Australia win by three wickets! Cummins hits it past Umesh Yadav as both the tailenders scamper for two runs. A thrilling finish to the opening match as the visitors win in the last ball to take a 1-0 lead in the two-match T20I series.

Win by 3 wickets in the 1st T20I https://t.co/qKQdie3Ayg #INDvAUS pic.twitter.com/hMwOZbWjY2

22:07 IST: WICKET! Coulter-Nile is clean bowled as Bumrah bowls a perfect yorker. End of the 19th over. Australia need 14 runs from 6 balls. The crowd at Vizag is thrilled to bits.

21:55 IST: Nathan Coulter-Nile is the new batsman at the crease.

21:52 IST: WICKET! Ashton Turner is clean bowled by Krunal Pandya as Australia lose half their side for 101 runs.

21:48 IST: RUN OUT! A bad mix up between Short and Handscomb results in the dismissal of the well-settled Short. He has been dismissed for 37.

Quite a mix up there and the well set D'Archy Short departs. Australia 101/4 after 16 overs.https://t.co/qKQdie3Ayg #INDvAUS pic.twitter.com/fbuZz9zfoO

21:44 IST: FOUR! Short hits Markande towards the cover region for his fifth boundary.

21:41 IST: Debutant Peter Handscomb is the new batsman at the crease.

21:40 IST: WICKET! Maxwell top-edges as Chahal strikes for India. The Victorian made 56 runs from 43 balls.

21:30 IST: FOUR! D'Arcy Short cuts one for a four through the point region.

21:24 IST: Chance! Maxwell was almost dismissed. A great effort by Rohit Sharma at the deep.

21:15 IST: Seven overs have been bowled. Australia are 44/2. Debutant Mayank Markande has been introduced into the attack by Virat Kohli.

21:11 IST: FOUR! An excellent back-foot drive earns Maxwell back-to-back boundaries. He has moved on to 27 runs off just 13 balls. His innings include five fours and a six.

21:10 IST: SIX! Maxwell rocks back and smacks Chahal for a huge six over deep mid-wicket region.

21:05 IST: FOUR! Another boundary. Maxwell is taking on Umesh as he hits the third boundary of the over. Australia reach 22/2 after four overs.

Two in two there as Stoinis and Finch depart early on.

20:56 IST: WICKET! Jasprit Bumrah strikes. Aaron Finch has been adjudged LBW first ball. Finch reviews it but has to go as the replay shows "umpire's call".

20:50 IST: Yuzvendra Chahal has been introduced by Virat Kohli in the second over.

20:45 IST: Australia's innings begins. Jasprit Bumrah to bowl the first over for India.

Australian bowlers restrict #TeamIndia to a total of 126/7 in 20 overs.

20:33 IST: WIDE! Coulter-Nile bowls a wide. He has been impressive with the ball.

20:21 IST: FOUR WIDE! These are bonus runs for India towards the end.

20:18 IST: Yuzvendra Chahal is the new batsman at the crease.

20:08 IST: WICKET! Krunal Pandya top-edges the ball as Glenn Maxwell takes an easy catch. Coulter-Nile gets his third wicket. India are in deep trouble at 100/6.

20:04 IST: Adam Zampa completes a successful over as India could manage just one run from the 14th over.

20:00 IST: WICKET! Karthik is clean bowled. Coulter-Nile strikes. India are in trouble as they are reduced to 94/5 in 13 overs.

19:58 IST: Dinesh Karthik comes in to bat following the dismissal of Rahul.

19:56 IST: WICKET! KL Rahul has been dismissed. India are four down with 92 runs on board.

Much needed runs for #TeamIndia opener @klrahul11, as he brings up his 5th T20I half-century off 35 deliveries #INDvAUS pic.twitter.com/hWaCY8yjlx

19:49 IST: Dhoni and Rahul steal an extra run. A risky two runs taken by the duo.

19:44 IST: RUN OUT! Rishabh Pant has to go courtesy a brilliant fielding effort by Jason Behrendorff. India are 80/3 at the halfway mark.

19:40 IST: Rishabh Pant is the new batsman at the crease.

19:37 IST: WICKET! Zampa strikes. It's the big wicket of Virat Kohli. The Indian captain has been dismissed for 24. He tried to step out and clear it over long on only to find Nathan Coulter-Nile.

19:23 IST: FOUR! Kohli flicks it for a magnificent boundary.

19:19 IST: FOUR! Kohli hits it straight over the bowler. Brings the bottom-hand into play.

19:17 IST: FOUR! Rahul lofts it over the close-in fielders towards deep cover region.

19:12 IST: Captain Virat Kohli is the new man at the crease.

19:00 IST: Match about to begin. Rohit Sharma to face the first ball. Jason Beherendorff to bowl.

18:54 IST: Players from both the teams have lined-up for the national anthem.

18:45 IST: Shikhar Dhawan has been rested today. KL Rahul will open for India along with Rohit Sharma.

18:26 IST: Mayank Markande will make his debut for India whereas Peter Handscomb will debut for Australia.

Mayank Markande all set to make his T20I debut for #TeamIndia #AUSvIND pic.twitter.com/Ogv0V1iHzO

18:22 IST:  India have a strong T20I record against Australia at home. They have won four out of the five matches played at home.

18:18 IST: India and Australia continue their cricketing rivalry as India host Australia. Virat Kohli and his men had a successful tour Down Under where they won the Test as well as the ODI series 2-1. The T20 International series ended 1-1.

18:15 IST: Hello and welcome to our live coverage of the first of the two-match T20I series between India and Australia in Visakhapatnam.

The likes of Rishabh Pant and all-rounder Vijay Shankar are aiming to make the final cut to the World Cup and the T20I series will go a long way in boosting their confidence. With Hardik Pandya out injured, it will be a great opportunity for Shankar to strengthen his case while Pant will also look to make the most of the chances he gets. For Dinesh Karthik, who was dropped from the ODI squad to play Australia, the two T20Is will be his last chance on the international stage to make a statement before the World Cup. Coming to India's bowling department, pace spearhead Jasprit Bumrah is back after a break. Bumrah is two shy of his personal tally of 50 wickets in T20I cricket, an achievement only in possession of Ravichandran Ashwin. All eyes will be on rookie leg-break bowler Mayank Markande who could make his debut in international cricket.

Glenn Maxwell ACA-VDCA Stadium, Visakhapatnam Cricket Live Blogs Live Score Live Cricket Score India vs Australia, 1st T20I India vs Australia, 2018/19
Get the latest updates on India vs South Africa and check out  Schedule, Results and Live Score. Like us on Facebook or follow us on Twitter for more sports updates. You can also download the NDTV Cricket app for Android or iOS.