U-19 World Cup: The match was reduced to 47 overs per side after rain had interrupted the proceedings at the Vivian Richards Stadium in Antigua on Tuesday. 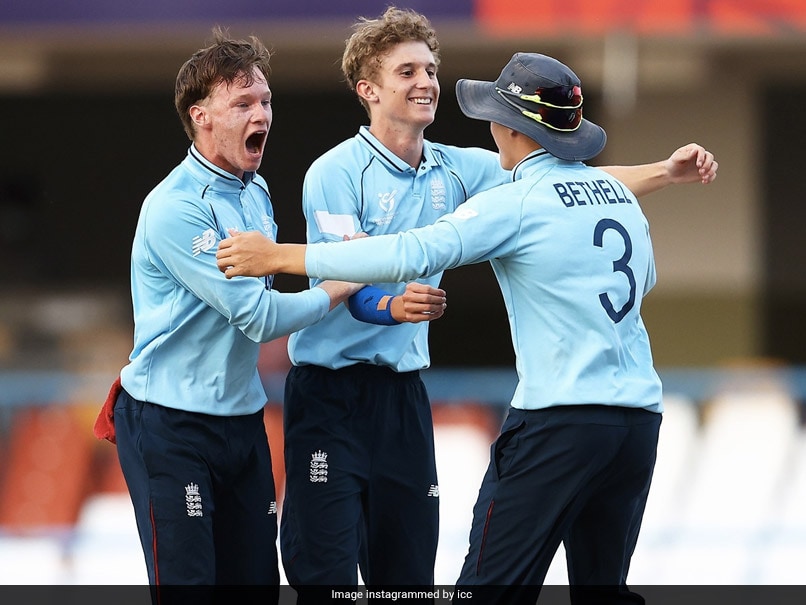 Rehan Ahmed took three wickets in the penultimate over as England defeated Afghanistan in a thriller to reach the final of the ICC U-19 World Cup after 24 years. The match was reduced to 47 overs per side after rain had interrupted the proceedings at the Vivian Richards Stadium in Antigua on Tuesday. After opting to bat first, England had the worst possible start to their innings, losing opener Jacob Bethell in the fourth over. George Thomas and skipper Tom Prest seemed to have steadied the ship before the latter's dismissal in the 10th over.

England were reeling at 106 for five at one stage. However, half-centuries from Thomas, George Bell and wicketkeeper-batter Alex Horton propelled England to 231 for 6 in 47 overs.

Watch: England Beat Afghanistan in a thriller to reach U-19 World Cup final after 24 long years

Chasing a target of 231 (DRS), Mohammad Ishaq and Allah Noor added 93 runs for the second wicket after opener Nangeyalia Kharote (0) was bamboozled by Joshua Boyden in the first over.

However, England pegged back Afghanistan with the wickets of Ishaq and skipper Suliman Saifi in quick succession, reducing the Asian side to 95 for three.

Noor scored a fine 60 but he was also dismissed 11 runs later.

There were some late fireworks from Abdul Hadi (37), Bilal Ahmad (33) and Noor Ahmad (25) but Rehan Ahmed's three-for in the penultimate over ended Afghanistan's hopes of pulling-off a famous upset.

England won the match by 15 runs as Afghanistan were restricted to 215 for nine in 47 overs.

This will be their first appearance in the summit clash since 1998, when they had gone on to lift the title in South Africa.

England U19 George Thomas George Bell Alex Horton Noor Ahmad Allah Noor Abdul Hadi Sir Vivian Richards Stadium, Antigua Cricket ICC Under 19 World Cup 2022 England Under-19 vs Afghanistan Under-19, 1st Semi-Final
Get the latest updates on Fifa Worldcup 2022 and check out  Fifa World Cup Schedule, Stats and Live Cricket Score. Like us on Facebook or follow us on Twitter for more sports updates. You can also download the NDTV Cricket app for Android or iOS.