Watch: Afghanistan U-19 Players Show Off Their Dance Moves In Training

ICC U-19 Cricket World Cup: In fine form in the ongoing tournament, the Afghanistan U-19 team caught the attention of fans with their unique training dance moves. 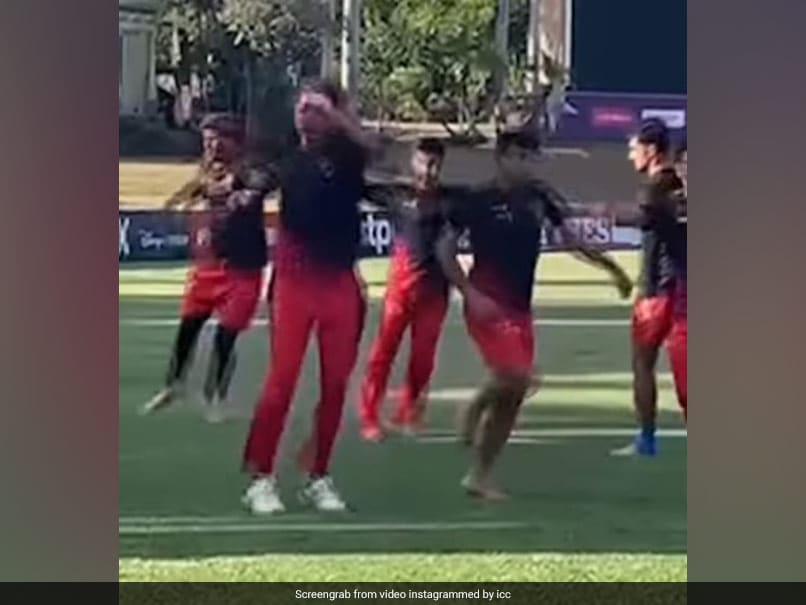 The Afghanistan players could be seen dancing during training in the U-19 World Cup.© Instagram

With Afghanistan gearing up to face Sri Lanka in their Super League Quarter Final 4 fixture of the ongoing U-19 Cricket World Cup, the ICC took to social media to give fans an update about the team's preparations. In a video shared on social media, the youngsters could be seen doing their unique way of warming up with some dance moves. Posting the video on Instagram, the ICC captioned it as: "The Afghanistan U19 squad has got some moves". Here is the video:

One user explained that the dance being performed by the players is Attan, a dance form popular among Pashtuns.

The Afghan team was in good form during the group stage and came second in Group C behind Pakistan. Led by Suliman Safi, they notched four points with a net run-rate of 1.467.

In their previous game, they defeated Zimbabwe by 109 runs and will be hoping to build on some momentum.

Against Zimbabwe, the Afghans posted 261 for six courtesy of a century by their skipper.

The Afghanistan captain put on 111 from 118 balls, including 14 fours and three sixes, to move Afghanistan to 261 for six as he was dismissed on the final ball of the innings. Four other batters posted scores of over 20, with opener Nageyalia Kharote contributing an important half-century from 45 balls.

Alex Falao was the pick of the bowlers for Zimbabwe as he took three for 54 from his ten overs to move on to eight wickets for the tournament so far.

Meanwhile, left-arm spinner Nangeyalia Kharote ensured that they successfully defended their target of 262 runs and registered four wickets to bowl Zimbabwe out for 152 in 36.4 overs.

Afghanistan's Super League Quarter Final 1 is scheduled to take place on Thursday and will be held at the Coolidge Cricket Ground in Osbourn, Antigua.

Afghanistan U19 Cricket
Get the latest updates on IPL Auction 2023 and check out  IPL 2023 and Live Cricket Score. Like us on Facebook or follow us on Twitter for more sports updates. You can also download the NDTV Cricket app for Android or iOS.