The Afghanistan cricketers performed the 'Attan', which is a traditional dance and has a very special place in the country's culture. The International Cricket Council (ICC) took to Instagram and shared a video of the Afghanistan players' celebration. 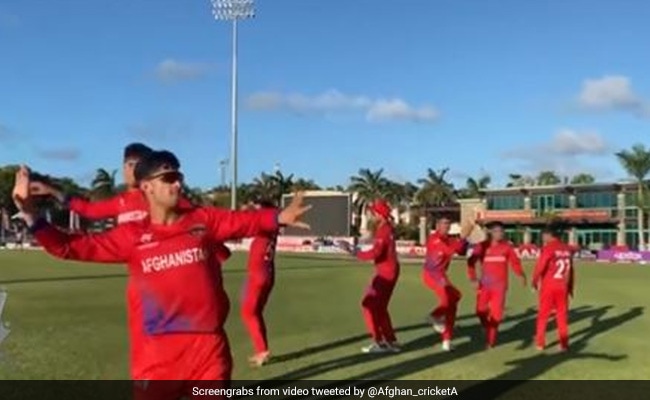 Afghanistan booked their place in the semi-finals of the ongoing ICC U19 World Cup after beating Sri Lanka in a thriller at the Coolidge Cricket Ground in Antigua on Thursday. Despite being bowled out for a below-par total of 134, Afghanistan pulled off a dramatic win, and became the first Afghan team at any level to reach a World Cup semi-final. Following their historic win, the Afghanistan players celebrated in a unique way. The players performed the 'Attan', which is a traditional dance and has a very special place in the country's culture.

The International Cricket Council (ICC) took to Instagram and shared a video of the Afghanistan players' celebration.

Watch: Afghanistan cricketers dance to celebrate their dramatic win over Sri Lanka in U19 World Cup

The Afghanistan Cricket Board (ACB) also shared a sneak peek of the team's post-match celebrations on Twitter.

The Future stars have all the rights in the world to celebrate thier quarter final win over SL U19s. #FutureStars | #AFGvSL | #U19CWC2022 pic.twitter.com/SNmr2jtTIx

After being put in to bat first, four of Afghanistan's top five batters were stunned by Sri Lankan bowler Vinuja Ranpul, who's efforts left them reeling at 26 for four at one stage.

Allah Noor and Abdul Hadi stitched some important runs, adding 47 for the fifth wicket, before the former was dismissed for 25.

Noor Ahmad then partnered Hadi as the pair added another crucial 48 runs to take their score past the 130-run mark.

Chasing a 135-run total, Sri Lanka were reduced to 43 for seven at one stage before skipper Dunith Wellalage steadied their ship, scoring 34 runs during a 69-run partnership with Raveen da Silva.

However, his dismissal 41st over saw Sri Lanka eventually being bowled out for 130.

Afghanistan will face England in the first semi-final at the Sir Viv Richards Stadium in North Sound, Antigua, on February 1.

Afghanistan U19 ICC Under 19 World Cup 2022 Cricket
Get the latest updates on ICC Women's Cricket World Cup 2022 and IPL 2022, check out the Schedule , Live Score and IPL Points Table. Like us on Facebook or follow us on Twitter for more sports updates. You can also download the NDTV Cricket app for Android or iOS.