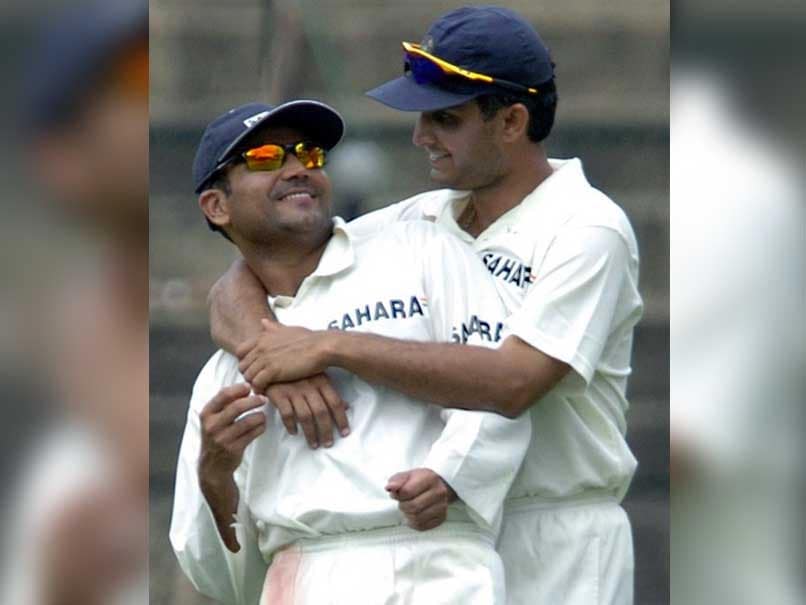 Virender Sehwag is one of the contenders to become the next India head coach.© AFP

Former India captain Sourav Ganguly and opening batsman Virender Sehwag indulged in some hilarious banter in the commentary box during one of India's Champions Trophy matches. It all started after Ganguly applauded Indian cricket captain's ability to run between the wickets. Viru, in his inimitable style, said that Dada too was brilliant at the same.

"Absolutely, I used to run very fast between the wickets," Ganguly replied.

"If only you could run as fast as Kohli," shot back Viru.

This prompted Ganguly to challenge his former teammate to a 100-meter race.

"Whoever is watching this broadcast, I want to challenge Viru in front of you all. After this tournament ends, we shall meet at The Oval and have a 100-meter race," Ganguly said.

"Dada you will have to cover those 100 meters in the first place," was Sehwag's retort.

"I shall do that easily, and also provide you with two physios. This is a misunderstanding and rumour that you have spread among our viewers, our team, and us ex-cricketers. I'd like to show these statistics to our viewers," Ganguly said.

Ganguly then informed the viewers about the singles percentage of the two.

"Sourav Ganguly's singles percentage was 36 and Virender Sehwag's was 24. And you're criticising my ability to run between the wickets?"

"Running-between-the-wickets is the ability to convert ones into twos, twos into threes, and threes into fours. And to reach the wickets on time," the 44-year-old added.

However, Sehwag has a response to that as well.

"Dada, these stats show your singles percentage, not your ability to convert ones into two and twos into threes. You never had a problem taking just one run. You would easily take those from fine-leg, third-man, deep-point, long-on," the Delhi batsman said.

Ganguly then reminded Viru that he had still had to give an interview for the position of India's head coach in front of the Cricket Advisory Committee (CAC).

"This is the reason why you should check your statistics and stop talking ill about others. You still have to give an interview in front of me," Ganguly said.

"I would like to tell our viewers that we have had to do commentary for two extra overs because it was so important for Dada to show these stats to our viewers," Sehwag replied after a bout of laughter.

Former Indian wicketkeeper-batsman Saba Karim then jumped into the conversation.

"I can't wait for the end of this tournament now. I am going to hold the stopwatch when the two of you sprint and time you both. Let's see who wins!" Karim said.

"That's all that you have done in the past six-seven years. You have only selected players and used your stopwatch," Ganguly replied.

Karim and Sehwag burst into laughter on hearing Dada's remark.

Comments
Topics mentioned in this article
India Cricket Team ICC Champions Trophy 2017 Sourav Ganguly Virender Sehwag Cricket
Get the latest updates on IPL 2021, IPL Points Table , IPL Schedule 2021 , live score . Like us on Facebook or follow us on Twitter for more sports updates. You can also download the NDTV Cricket app for Android or iOS.