Ireland's Anna O'Flanagan (12th minute) was the lone goal scorer in the match. 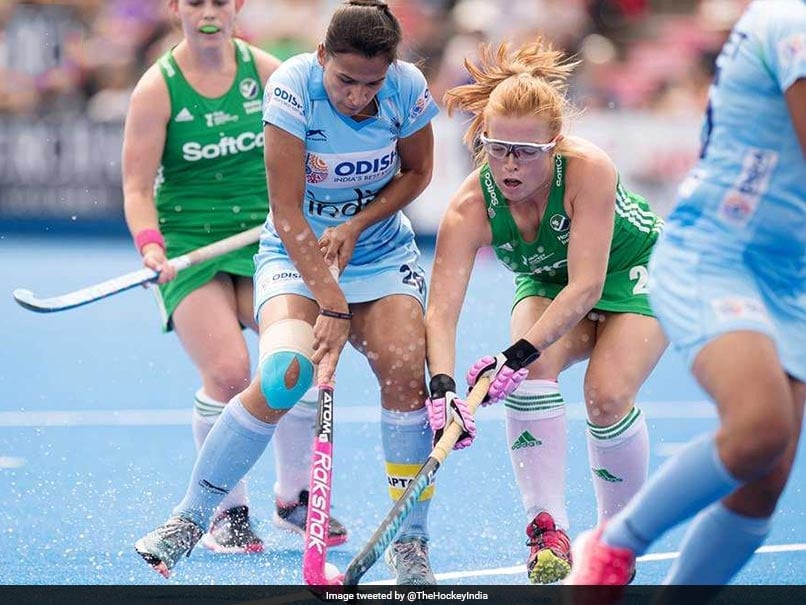 India are currently at third position in the points table behind Ireland and hosts England.© Twitter

The India women's hockey team suffered a 0-1 loss to Ireland in their second Pool B match at the Lee Valley Hockey Center, London. By virtue of this win, Ireland became the first team to qualify for the Women's Hockey World Cup quarter-final. Ireland also became the second lowest ranked team to qualify for the quarter-finals. Determined to build upon their surprise 3-1 triumph over USA, Ireland opened the scoring thanks to a wonderful penalty corner routine, with Anna O'Flanagan angling the perfect deflection high into the Indian net in the 12th minute of the match.

After conceding a goal in the opening fifteen minutes, India resorted to attacking options in the second quarter, creating multiple chances. But the Indian attackers failed to seriously threaten the goal occupied by Ireland shot-stopper Ayeisha McFerran.

India yet again had the better off Ireland in the third quarter, creating multiple penalty corners but the continental champions of Asia failed to make the most of their opportunities. Although Ireland were forced deep into their own territory for much of the quarter, the team missed a glorious chance to score a second when Nicola Evans failed to connect with a terrific pass across the face of goal towards the end of the third quarter.

India continued with majority possession in the final quarter but failed to find the back of the Irish net time and again. In the final five minutes, India replaced goalkeeper Savita with an outfield player in an effort to get an equaliser but it did not yield any result. India captain Rani Rampal had a wonderful opportunity to give her side a share of the points in the 57th minute but her shot was confidently kicked away by goal-keeper McFerran to ensure Ireland's victory.

With one game left to play in Pool B, third-placed India still have an outside chance to qualify for the knock-out stages. India will next play USA in their final Pool B encounter on July 29.

Comments
Topics mentioned in this article
Hockey India Women
Get the latest updates on SA vs IND 2021-22, check out the Schedule and Live Score . Like us on Facebook or follow us on Twitter for more sports updates. You can also download the NDTV Cricket app for Android or iOS.