Neha Goyal scored the first goal of the match in the 25th minute while Lily Owsley scored the equalizer for England in the 53rd minute. 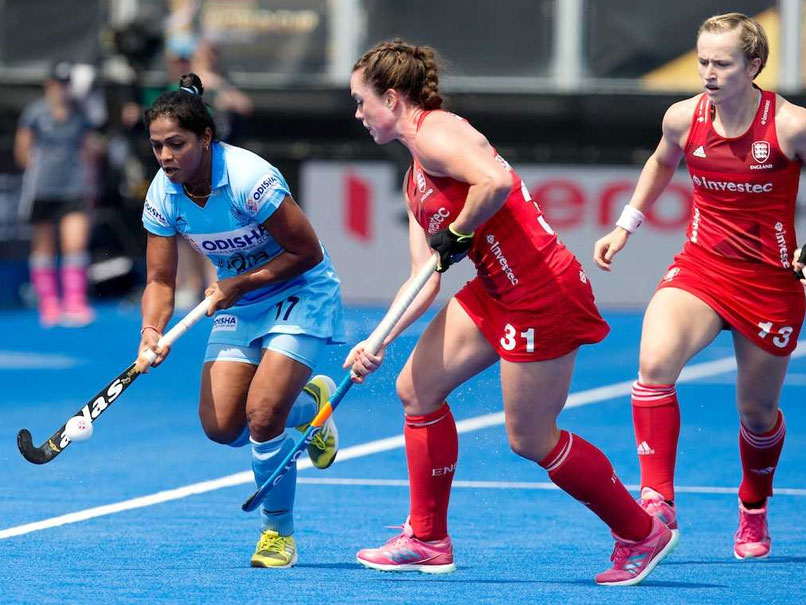 India will play their next group game against Ireland on 26th July.© Hockey India

Indian women's hockey team started their World Cup 2018 campaign with a 1-1 draw against England at the Lee Valley Hockey and Tennis Centre on Saturday. The match saw the Indian team take the lead in the 25th minute through Neha Goyal but a composed Lily Owsley scored the equalizer for the home team in the 54th minute helping the world number 2 team draw the first clash of the Pool B. England started off brilliantly in front of a packed stadium earning a penalty corner within the opening minute of the game. A brilliant save from goalkeeper Savita, which was cleared away by India's defenders, denied England with a lead at the start of the game.

The next few minutes saw India dominate possession and create a couple of circle entries, but could not take a shot at the goal. The second penalty corner for England was also scuffed by the defenders. World No. 10 India also tried to create pressure in the latter stages of the first quarter but neither team was able to take the lead.

The second quarter too saw brilliant attack from the English but goalkeeper Savita and defenders were up to the mark as well, saving three penalty corners in the opening ten minutes of the second quarter.  The Indian team absorbed the pressure and looked to attack the English on the counter. The strategy finally worked for the team with Neha Goyal netting the ball in the 25th minute.

The England in dominated the third quarter as they looked to find the equaliser. The World No. 2 side made 11 circle entries in the third period, but could only take three shots, which were well kept out by a resolute Indian defence.

In the final quarter, India had a chance to extend their lead in the 52nd minute but forward Lalremsiami failed to deflect the ball into the net. In the 54th minute, England won back-to-back penalty corners and the second one was put into the back of the net by Lily Owsley to bring the scores level at 1-1. The final few moments of the match saw both the teams look for a winner, but a good performance from the defenders saw both teams settle for a draw.

India will lock horns with World No. 16 Ireland in their next encounter on 26th July.

Comments
Topics mentioned in this article
Hockey India Women England Women
Get the latest updates on SA vs IND 2021-22, check out the Schedule and Live Score . Like us on Facebook or follow us on Twitter for more sports updates. You can also download the NDTV Cricket app for Android or iOS.