Women's Hockey World Cup Highlights, India vs England Hockey Match:Neha Goyal scored the first goal of the match in the 25th minute while Lily Owsley scored the equalizer for England in the 53rd minute. 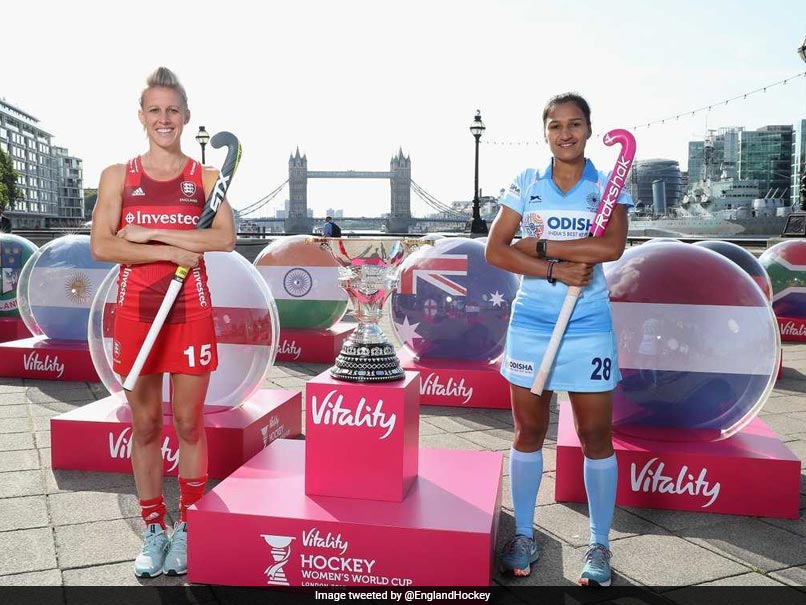 Composed Lily Owsley scored the equalizer for England in the 53rd minute as the hosts drew India 1-1 in the Pool B opener of the Women's Hockey World Cup at the Lee Valley Hockey & Tennis Centre, London on Saturday. After trailing 0-1 at half-time, England women came in with flurry of attacks in the third and the fourth quarters. The Indian defenders restricted England for the most part of the second half but ultimately gave up against resilient England attacks. For India, Neha Goyal was the lone scorer, netting the ball in the 25th minute. The England attackers controlled the ball for the most of the part in the final two quarters providing India almost negligible chance to extend their lead. A total of eight penalty corners were awarded to England throughout the game while India couldn't even manage one. India will next take on World No.16 Ireland on 26 July followed by World No.7 US on 29 July in their group stage matches.

19:56 IST: Just under a minute to goand both teams are searching really hard  for the winning goal.

19:48 IST: GOAL! Lily Owsleyscores the equalizer for England.Nets the ball as Indian defenders fail to get the ball away from the circle. That was the 53rd minute goal for England. IND 1-1 ENG.

19:46 IST: MISSED!That was a massive chance for India to seal the game but the sliding touch goes off wide.

19:45 IST: Under 10 minutes remaining now.England with flurry of attacks but are being checked brilliantly by the Indian defenders

19:41 IST: Another penalty corner for Englandafter a brilliant save from the Indian defenders.

19:34 IST: Just under 2 minutes to goin the 3rd quarter and Indian defenders have managed to contain the England attack.India still in the lead.

19:29 IST: Exceptionalplay from Alex Dansoninside the Indian circle but goalkeeper Savitacomes up with a brilliant diving save. IND 1-0 ENG.

19:25 IST:England women looking more aggressive in the opening minutes of the the third quarter but there has been some excellent defensive play from the Indians.

19:21 IST: Whistlefrom the referee and the third quarter gets underway.

19:08 IST:14 circle penetrations for England against 8 by India but England women are just not finishing the ball well. India still ahead 1-0 against England.

19:04 IST: GOAL! Neha Goyalbreaks the deadlock in the 25th minute and give India the lead.England called in for the review but the umpire decision stays. England also loose the referral. IND 1-0 ENG.

18:51 IST:Danson finds a quick cross for England but the goes wide.

18:47 IST: Just under a minute to go for the first quarter. Both teams still searching for the opening goal.

18:42 IST:England women are moving the ball around really quickly but are just not able to find the net.

18:40 IST: Penalty corner for Englandand the hosts miss the trick again. Another easy save for Indian defenders.

18:35 IST:England women have dominated ball possession in the opening minutes of the game. The ball has mostly been in the Indian half.

18:32 IST:Indian defenders get the ball away with ease. Counter attack from India, but England defenders are alert.

18:31 IST: Penalty corner for Englandwith just 42 seconds into the game.

18:29 IST: Handshakes all around. We have a packed stadium for the host's opening encounter against India.

18:25 IST: Both teams are at the centre along with match officials for the national anthems.

18:10 IST: We are just 20 minutes away from India's first encounter of the tournament. England, Ireland and United States are the the other three teams with India in Pool B.

18:00 IST: Hello and welcome to the live updates of the World Cup match between India and England.

India's previous appearance at the FIH World Cup was in 2010 when the event was held in Argentina. Rani then was the cynosure of India's ninth-place performance as she had scored maximum of seven goals for the team during the course of the tournament. While there will be a lot riding on Rani during the World Cup 2018 too, she has a unit that has shown confidence-inspiring performance over the past two years where India even climbed to a career-best ranking of World No.10. After having arrived in London a week prior to the start of the tournament, the Indian Team has had good training sessions at the event venue Lee Valley Hockey and Tennis Stadium including two practice matches against Australia and Belgium. "We have had good match practice against two of the top teams in the World. The team is upbeat and excited ahead of the first match and right now, our only focus is to do well against England. We have played USA and Ireland too in the past and have specific game plan against them. But for now, our focus is on the first match," Rani said.

Comments
Topics mentioned in this article
Hockey India Women England Women Live Blogs
Get the latest updates on India vs Australia and check out  Schedule, Results and Live Score. Like us on Facebook or follow us on Twitter for more sports updates. You can also download the NDTV Cricket app for Android or iOS.