Women's Hockey World Cup Highlights, India vs Ireland Hockey Match: Ireland secured the quarter-final berth in the 2018 Women's hockey World Cup with 1-0 victory against India in their pool B game. 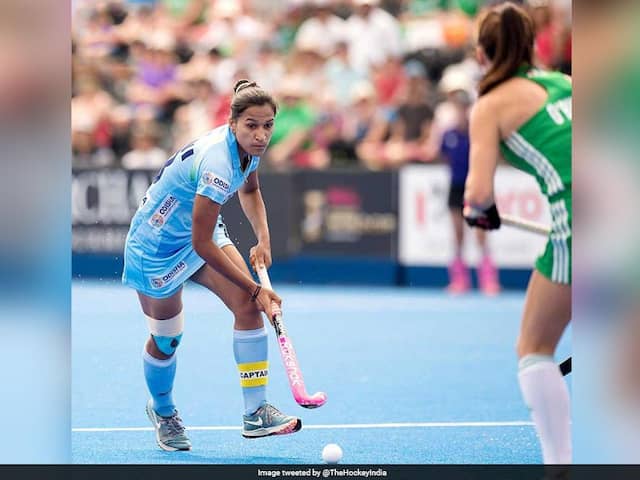 India women suffered a 0-1 loss to Ireland in their second Pool B match at the Women's Hockey World Cup encounter at the Lee Valley Hockey Center, London on Thursday. With a comfortable win against India and a total of two victories in the group stage, Ireland secured their quarter-final berth in the tournament. Anna O'Flanagan was the lone goal scorer in the match as both teams failed to net the ball after the initial 12th-minute goal. Shirley McCay’s sweep off the penalty corner was brilliantly deflected by Anna O'Flanagan as Ireland took the lead in the first quarter. Post that, both teams struggled and India in particular, looked sloppy in the final quarter. Towards the end, skipper Rani Rampal had a brilliant opportunity to find an equaliser for India in the 57th-minute but her strike was blocked by the Irish keeper. India, who will next play USA on July 29, are placed third in the table and still have a chance for qualifying for the quarter-finals.

19:51 IST: Rani with a brilliant shot on target but the Irish goal-keeper stands in-between. Another missed opportunity for India. Ireland 1-0 India

19:48 IST: Penalty corner for India and yet again saved with comfort by Irish defenders.

19:46 IST: Nicola Evans misses a simple chance on the back-post. The ball went through the two Indian defenders but Evans fails to net the ball. Ireland 1-0 India

19:44 IST: Multiple circle penetrations from India in last few seconds. India building on the momentum but Irish defenders are looking solid too.

19:41 IST: Neither side looking to make quick passes at the moment. Game moving relatively slow for India. Ireland dominating possession.

19:38 IST: Whistle from the umpire and the final quarter gets underway.

19:36 IST: Hooter and Ireland still in front at the end of third quarter. Ireland 1-0 India

19:35 IST: Penalty corner number six for India and another missed opportunity. Deepika tries reverse-hit on the second attempt but misses.

19:34 IST: Just under two minutes to go for the third quarter. No addition to the scoring. Ireland 1-0 India

19:31 IST: Brilliant counter-attack from Ireland at the moment. They have twice penetrated the Indian circle in the last few seconds. Long corner for Ireland.

19:28 IST: Penalty Corner for India and another miss for India. Ireland continue with brilliant defensive game. The ball goes over the post.

19:27 IST: Penalty Corner for India but a brilliant diving save from goal-keeper Ayeisha McFerran.

19:25 IST: Brilliant defensive game from Ireland at the moment. They are just not providing space to the Indian attackers in the circle. Ireland still lead 1-0 against India.

19:22 IST: India looking strong in the opening minutes of the third quarter but Irish defenders a up to the mark. Ireland still lead 1-0 against India.

19:21 IST: Ireland skipper Kathryn Mullan gets a green card from the referee.

19:18 IST: Whistle from the umpire and third quarter gets underway.

19:06 IST: Udita with the deflection but the ball goes off wide.

19:06 IST: Just under two minutes to go for the second quarter and India still looking for the equalizer. Ireland 1-0 India.

19:02 IST: Penalty corner for India and another miss from India. Brillianty defended by Hannah Matthews.

18:59 IST: Indian women playing under pressure at the moment. They are just not able to penetrate through the Irish defence. Ireland 1-0 India.

18:55 IST: Another penalty corner for Ireland. Cleared by the Indian defenders.

18:54 IST: Sunita Lakra gets a green card. Third for India so far in the tournament.

18:51 IST: Whistle from the umpire and the second quarter begins.

18:43 IST: Penalty corner for India and its another missed chance for India. Gurjit Kaur's shot is brilliantly defended and ball goes wide off the net.

18:43 IST: First penalty corner for Ireland in the match.

18:41 IST: 5 minutes remaining in the first quarter! Both teams are goal-less at the moment but India surely have the upper hand.

18:34 IST: Missed! Hannah Matthews clears the ball with ease. Gurjit's attempt from the set-piece is blocked by the strong Irish defence as India fail to take an early lead | India 0-0 Ireland

18:34 IST: Penalty corner for India! First one for India in the tournament.

18:33 IST: Indian attackers moving the ball brilliantly in the opening minutes of the game.

18:30 IST: Whistle from the umpire and the first quarter gets underway!

18:25 IST: Both teams are at the centre along with match officials for the national anthems. We are just minutes away from the start.

18:00 IST: We are just 30 minutes away from India's second group clash of the World Cup against Ireland.

17:10 IST: Currently, in group C clash, Spain Women are 2-0 ahead against South Africa at half-time.

17:05 IST: In group B, India are currently placed third on the table while Ireland are the table toppers with 3 points.

17:00 IST: Hello and welcome to the live updates of the Women's World Cup match between India and Ireland.

"I think it was a great match, a good start for us. There are so many positives that we can draw from that match which will help us in the upcoming matches in the tournament. I don't think we surprised with our performance because we have done well against England in the past and this time we went for a win," Rani said. The Indian captain further added that the team is prepared for the Ireland challenge. "The entire team including support staff sat down for a meeting after the match to discuss our performance. We also discussed the goal we conceded and how we could have averted it. Our team feels we can do better than what we played against England and the aim is to improve match-by-match," Rani asserted. "Yes, we have watched videos from Ireland's match against USA and credit goes to them for a good start and good defending to hold their lead till the end. In the three days' rest that we have had, we played few practice matches among ourselves to try out different methods in goal scoring and keep up the momentum. We need to make a good start against Ireland and keep up the pressure on them. We are confident and ready for the next challenge," she concluded.