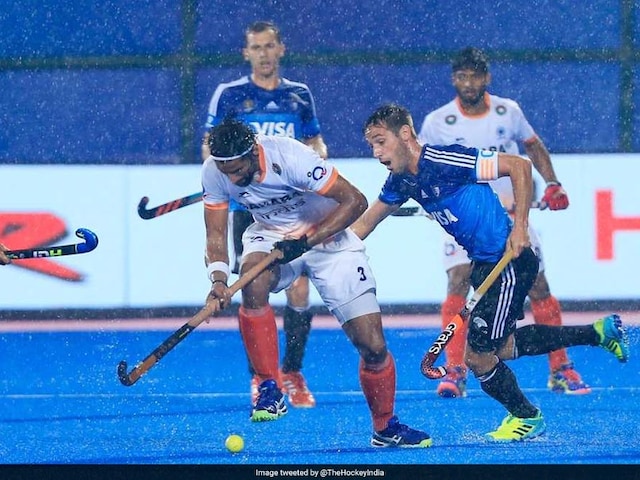 India will take on a depleted Germany in the bronze medal match of the the Hockey World League (HWL) Final on Sunday. Germany lost their semifinal 0-3 against world champions and title holders Australia at the Kalinga Stadium. Dylan Wootherspoon (42nd), Jeremy Hayward (48th) and Tom Wickham scored for Australia against a German side, which had only 13 players at its disposal today after four of them were ruled out of the match due to fever.

The Germany were already down to 17 men before Saturday's match as one player had returned home after suffering injury during the course of the tournament. Germany did not get the services of some of the key players like Martin Haner, Julius Meyer, Christopher Ruhr and Marco Miltkau today as they were down with fever since last night. Such was Germany's plight that they had to play reserve goalkeeper Mark Appel as a field player.

Australia will now play Argentina in the summit clash of the tournament, scheduled to be held tomorrow evening. After having lost 0-2 to Germany in the pool stages of the tournament, the Indians would be hoping to avenge the defeat. And come Sunday, the hosts can breathe a little easy against the Germans, who are bound to field a depleted side again because of fever and injury.

Having finished third in the last edition of the tournament in Raipur in 2015, India desperately wanted to go one step further this year but their dreams were crushed by the experienced Olympic champions Argentina, who displayed calm and cool temperament under difficult playing conditions to hold on to their solitary lead in the semifinals.

The ongoing HWL Final is Asian champion India's biggest tournament before next year's Commonwealth Games in Gold Coast and coach Sjoerd Marijne and his men would be eager to make the most out of the opportunity with a morale-boosting result in their favour.

Luck did not favour the hosts in the semi-final as torrential rains wreaked havoc on Friday and made the pitch wet and waterlogged, thereby making life difficult for the Indians, who struggled to play their natural counter-attacking hockey against the Argentines.

Even though India had the better match statistics in terms of ball possession, shots on goal and circle penetrations, they failed to break the resolute Argentine defence. The close defeat, that too, in difficult playing conditions will definitely be hard to digest for the Indians but they cannot afford to get bogged down by that and let it affect them mentally.

The conditions might not have been favourable but India created a handful of scoring chances against Argentina that included two back-to-back penalty corners but they continued to misfire time and again in the tournament.

Sunday's match will also be the last time for India to impress upon the hockey crazy fans of the temple city before next year's World Cup, as the stadium not only witnessed capacity attendance on all days but also braved intermittent rain and windy conditions to support the home team on Friday. All in all, India have a great chance to reclaim their bronze medal tomorrow against a bruised and battered German side.

Earlier in the day, Olympic silver medallist Belgium beat Spain 1-0 to finish fifth in the eight-nation tournament. Sebastien Dockier scored the only goal of the match from a field effort in the fourth minute.