A day after Hamilton's exploitsin Canada, Mercedes uploaded a video on their official Twitter handle in which Hamilton could be seen pushing the team team physioAngela Cullen into the river. 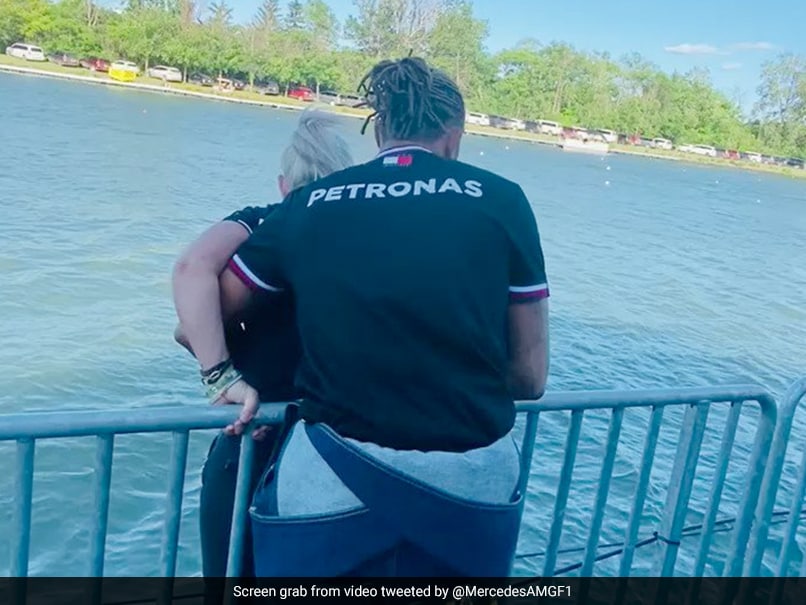 Lewis Hamilton was a happy man on Sunday as he helped his side Mercedes finish on the podium, courtesy his third place finish in the Canadian Grand Prix. Notably, it was only the second podium finish of the year for the seven-time world champion and his first since the opening round of the year in Bahrain. The win gave the British racer and his team Mercedes something to rejoice in what has not been such a great season for the duo so far.

A day after Hamilton's exploits in Canada, Mercedes uploaded a video on their official Twitter handle in which Hamilton could be seen pushing the team team physio Angela Cullen into the river.

To make things clear to the netizens, Mercedes also put a caption with the post which revealed that Angela had bet to jump into the river in case Hamilton finished at the podium in Canadian GP.

While Hamilton made it to the podium, he made sure Angela doesn't forget her bet and gave her a final push into the river after the physio took her time to jump.

Angela said if Lewis finished on the podium she'd jump in the river. She just needed a little push… ???? pic.twitter.com/RfoqhVIl9O

"It feels great to be in amongst the battle," said Hamilton after his win in Canada.

"For a second I was kind of keeping up with these guys. It's given me and the team a lot of hope that there's more to come from this car, the potential is there.

"When you get a full race distance you find a lot out with the car. A lot to take from today. Got really good reliability. Great work from the team. Just got to keep our heads down. I know where I'm losing to these guys, so that's where I'm going to focus on attacking to improve."

Max Verstappen
Get the latest updates on ICC T20 Worldcup 2022, check out the Schedule and Live Score. Like us on Facebook or follow us on Twitter for more sports updates. You can also download the NDTV Cricket app for Android or iOS.