Sebastian Vettel leads the drivers standings on 171 points from Lewis Hamilton on 151 and Valtteri Bottas placed third on 136. 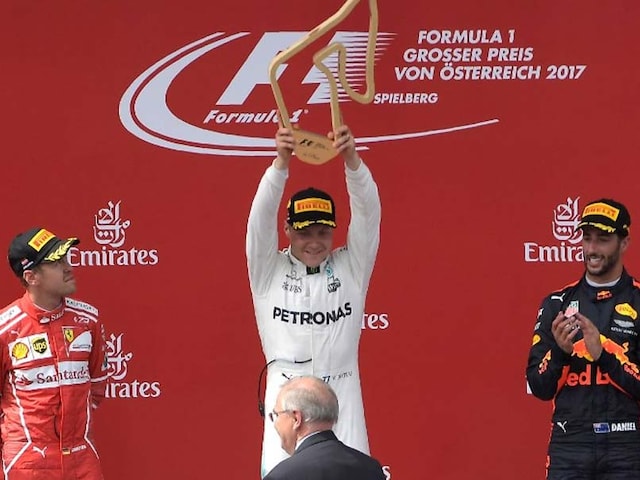 Valtteri Bottas roared to the second victory of his career on Sunday when he won the Austrian Grand Prix for Mercedes ahead of championship leader Sebastian Vettel of Ferrari. The Finn, in his first season with Mercedes after replacing 2016 champion Nico Rosberg, came home 0.658 seconds clear of Vettel who increased his lead ahead of Lewis Hamilton in the drivers championship to 20 points. Hamilton, in the second Mercedes, did his utmost to grab a podium finish after starting from eighth on the grid, but had to settle for fourth behind Australian Daniel Ricciardo of Red Bull.

For Ricciardo, on his team’s 'home' Red Bull Ring circuit, it was a fifth consecutive podium finish and the 22nd of his career.

Vettel now leads the drivers championship with 171 points ahead of Hamilton on 151 and Bottas on 136, while in the constructors title race Mercedes lead with 287 ahead of Ferrari on 254.

Kimi Raikkonen, the 2007 champion, came home fifth in the second Ferrari ahead of Romain Grosjean of Haas, the two Force Indias of Mexican Sergio Perez and Frenchman Esteban Ocon.

Felipe Massa and his Williams teammate Canadian teenager Lance Stroll finished ninth and 10th after starting 17th and 18th on the grid.

Comments
Topics mentioned in this article
Mercedes Ferrari Red Bull Valtteri Bottas Sebastian Vettel Lewis Hamilton Daniel Ricciardo Austrian Grand Prix
Get the latest Cricket news, check out the India cricket schedule, Cricket live score . Like us on Facebook or follow us on Twitter for more sports updates. You can also download the NDTV Cricket app for Android or iOS.