Vettel clocked 1min 31.261sec around the 5.543-kilometre circuit on his qualifying simulation run in the second session to smash the old record of 1:32.50 set by Fernando Alonso in 2005. 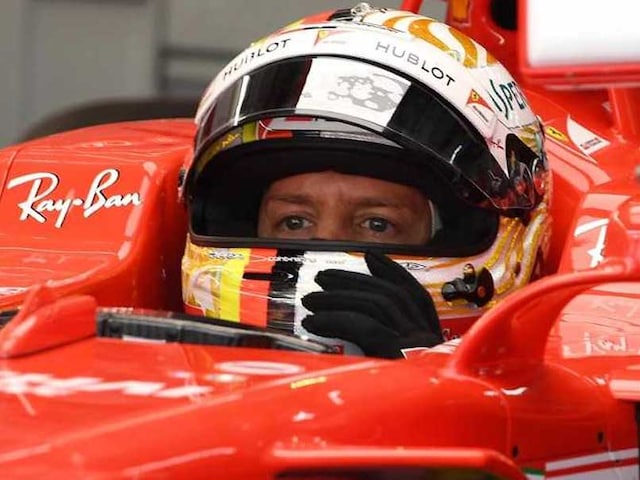 Sebastian Vettel smashed the all-time Sepang lap record as Ferrari put the pressure on Lewis Hamilton before a track fault brought an early halt to Malaysian Grand Prix practice on Friday. Vettel clocked 1min 31.261sec around the 5.543-kilometre circuit on his qualifying simulation run in the second session to smash the old record of 1:32.50 set by Fernando Alonso in 2005. His Ferrari team-mate Kimi Raikkonen was second, six-tenths of a second adrift. "It's been a decent day," Vettel told Sky TV.

The Red Bulls of Daniel Ricciardo and Max Verstappen were third and fourth on a frustrating day for Mercedes' championship leader, Hamilton who was only sixth fastest with Valtteri Bottas seventh. "Red Bull looked very fast in the mixed conditions this morning, in the damp and wet on the intermediate tyres," added Vettel.

Hamilton had been on just his 10th lap of the afternoon when he took too much speed into turn eight, resulting in a sideways excursion into the gravel and a wrecked set of soft tyres. Hamilton did manage to avoid beaching the car and was able to limp back to the pits, where his mechanics removed the nose and started making frantic changes to the set-up.

When he did re-emerge with 40 minutes of the session remaining his car appeared still to be handling erratically, and his first timed lap was fully 1.4 seconds down on Vettel. "Fridays are when you play around and try some things," Vettel said. "It looked like both Mercedes were struggling in morning and afternoon so I'm pretty sure they will be fine tomorrow."

Ricciardo added: "I think Mercedes were quite heavy today. I don't know if it's legit or they're playing some games." The session ended 20 minutes early when Romain Grosjean hit a loose drain cover at turn 9, ripping his rear tyre apart and throwing his Haas into the barriers at around 200 kph.

The Frenchman was lucky to be able to walk away but with no time to repair the offending part of the track the session was red flagged and then called off 10 minutes early.

Rookie Pierre Gasly also suffered a scare when he came into the pits with huge amounts of smoke billowing from the rear of his Toro Rosso. But it turned out to be just a minor oil leak and he was soon on his way again. Earlier, the first 30 minutes of the morning practice had been lost because of heavy rain. The two Red Bulls set the pace as lap times tumbled towards the end as the track dried and drivers switched to intermediate tyres.

Alonso was third, two seconds adrift of Verstappen as the Red Bulls proved untouchable in the wet.

Hamilton did not bother to leave the shelter of the Mercedes garage until 30 minutes from the end of the session, and could only set the sixth fastest time, three seconds behind the leading Red Bull and eclipsed by both Ferraris.

Vettel was only fifth quickest in the morning, four-tenths slower than Ferrari team-mate Kimi Raikkonen.

Comments
Topics mentioned in this article
Ferrari Red Bull Lewis Hamilton Sebastian Vettel Daniel Ricciardo Max Verstappen Valtteri Bottas
Get the latest Cricket news, check out the India cricket schedule, Cricket live score . Like us on Facebook or follow us on Twitter for more sports updates. You can also download the NDTV Cricket app for Android or iOS.