Reigning champion Lewis Hamilton finished ahead of his Mercedes team-mate Valtteri Bottas at Mugello to claim his 90th Formula One victory. 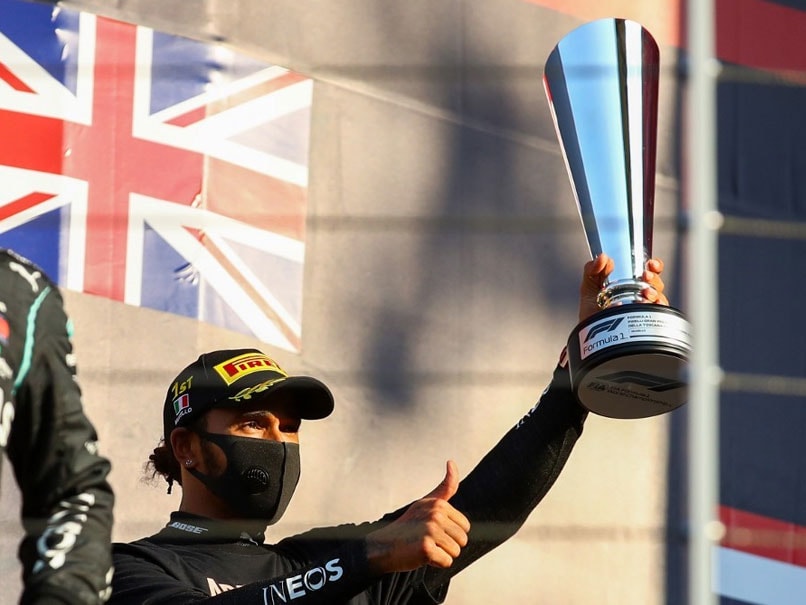 Lewis Hamilton demonstrated his class and authority on an afternoon of wild chaos on Sunday when he won an extraordinary crash-hit Tuscan Grand Prix to extend his runaway lead in this year's Formula One championship. Reigning champion Hamilton finished ahead of his Mercedes team-mate Valtteri Bottas at Mugello to claim his 90th F1 victory, moving the Briton to within one win of equalling Michael Schumacher's all-time record for GP wins. Hamilton prevailed with a well-judged performance in exhausting conditions, in a race which only 12 drivers finished following two multi-car collisions and three Safety Car interventions.

"It's was all a bit of a daze," said Hamilton to Sky Sports.

"It was incredibly tough today... All the those restarts, the concentration that's needed during that time, it was really, really hard."

Hamilton is now on 190 points, some 55 ahead of Bottas and is also on course this season to equal Schumacher's record of seven world titles after claiming his sixth win in nine races this year.

The 35-year-old extended his record run of finishes in the points to 42 as he claimed his record 158th podium ahead of Bottas, who pursued him all the way to the flag.

It was also record 222nd finish in the points for Hamilton and the first time this season Mercedes had delivered a one-two finish and the fastest lap of the race.

'Three races in one'

Alex Albon finished third, claiming his first podium finish for Red Bull, after a thrilling drive to compensate his team for the early exit of Max Verstappen in the first collision.

Daniel Ricciardo finished fourth for Renault ahead of Sergio Perez of Racing Point, Lando Norris of McLaren, Daniil Kvyat of AlphaTauri and Charles Leclerc, who scored points for Ferrari on home soil as they ended a miserable run in an event organised to mark their 1,000th Grand Prix.

Kimi Raikkonen was ninth for Alfa Romeo and outgoing Sebastian Vettel finished 10th for Ferrari. He replaces Perez at the rebadged Aston Martin team next year.

The race took two hours and 25 minutes to complete, with the spells behind the Safety Car adding up to 76 minutes.

"It was three races in one today," said Hamilton. "This circuit is phenomenal and with the heat it was tough to keep Valtteri behind me."

Hamilton wore a T-shirt emblazoned with the message "Arrest the cops who killed Breonna Taylor" during a pre-race anti-racism ceremony when he and the Mercedes team took a knee and for his for his post-race interview on the track and the podium celebrations.

Taylor was shot dead aged 26 by police in the US state of Kentucky in March.

The first crash took out Verstappen, who lost power after a good launch, and last week's winner Pierre Gasly, leading to six laps behind the Safety Car and repairs for Vettel and Alfa Romeo's Kimi Raikkonen.

When the race re-started on lap seven, it was halted by a more spectacular multi-car smash, which saw six more cars eliminated. Amazingly, no-one was injured.

It did result in elimination for McLaren's Carlos Sainz, Antonio Giovinazzi of Alfa Romeo, Kevin Magnussen of Haas and Williams rookie Nicholas Latifi –- and a stewards investigation.

Footage of the carnage suggested that Italian Giovinazzi appeared to smack into Magnussen and Latifi, which triggered a further collision with Sainz.

Sainz said that the crash "was properly scary" while in a foul-mouth rant Romain Grosjean called it "the worst thing I've seen ever".

Carlos Sainz Jr.
Get the latest updates on T20 World Cup, check out the T20 World Cup Schedule and Live Score . Like us on Facebook or follow us on Twitter for more sports updates. You can also download the NDTV Cricket app for Android or iOS.