Valtteri Bottas maintained his recent habit of being fastest on Friday when he clocked the quickest lap in opening practice for this weekend's inaugural Tuscan Grand Prix. 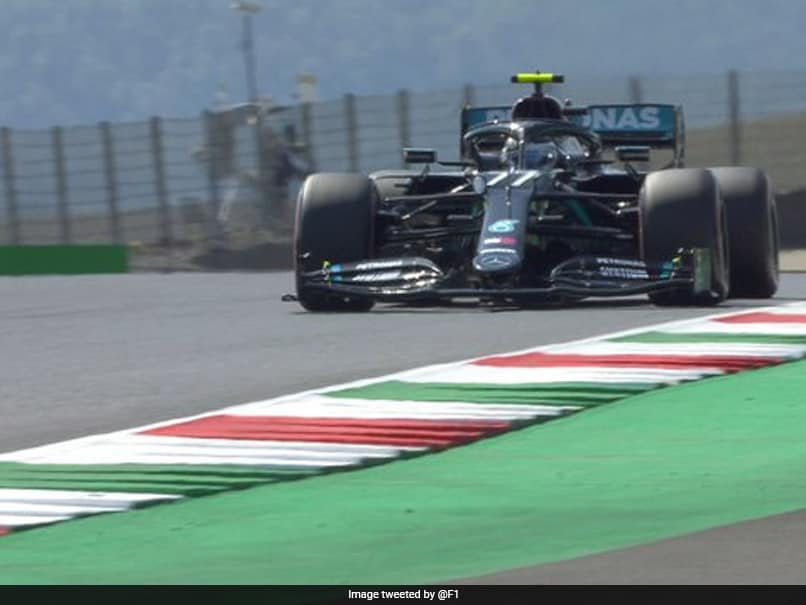 Valtteri Bottas has recently made a trend of coming out on top during practice sessions.© Twitter

Valtteri Bottas maintained his recent habit of being fastest on Friday when he clocked the quickest lap in opening practice for this weekend's inaugural Tuscan Grand Prix. The Finn, in his Mercedes, clocked a best lap in one minute and 17.819 seconds at the sweeping Ferrari-owned Mugello circuit to outpace nearest rival Max Verstappen of Red Bull by 0.048 seconds. The track is being used for the first time as a Grand Prix venue to mark the celebrations for Ferrari's 1000th F1 race entry and sparked an improvement in the Italian team's fortunes as Charles Leclerc was third fastest for the 'scarlet scuderia', running in retro burgundy livery, three-tenths off the pace.

It was the first time in three events that Ferrari had a car in the top ten after Friday morning practice - a welcome fillip for the team as they sought to bounce back from their pointless flops at Spa Francorchamps and Monza.

On a beautiful morning under blue skies in central Italy, opening free practice began with Bottas setting the early pace before Monza victor Gasly took over followed by Verstappen.

The first half hour of the 90 minutes saw slow progress as the teams gathered data and the drivers became accustomed to the nuances of the fast, flowing and spectacular circuit.

Following a lull, Norris went top with a lap in 1:18.981 before the times tumbled, Ocon, Hamilton, Leclerc and then Bottas, cutting the fastest to 1:17.879, the Finn maintaining his habit of being fastest on Friday.

After four weeks, he was seeking his fifth 'fastest on Friday' tag.

In pursuit, Ferrari found it was hot going on their own circuit as their tyre temperatures rose dramatically through the fast corners.

"Might as well box, the tyres are way too hot," said Vettel before coming in. The air temperature was rising at 29 degrees and the track was 43 degrees, sufficiently warm to ensure tyre wear was an issue.

Ferrari Charles Leclerc Formula 1
Get the latest updates on IPL 2021, check out the IPL 2021 Schedule and Indian Premier League Live Score . Like us on Facebook or follow us on Twitter for more sports updates. You can also download the NDTV Cricket app for Android or iOS.