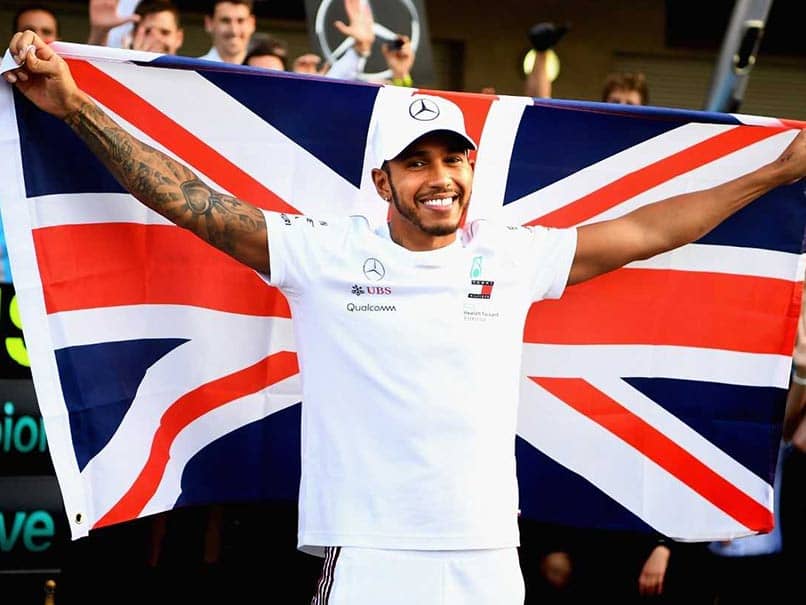 Lewis Hamilton claimed his fifth drivers' world championship on Sunday to draw level with Juan Manuel Fangio in the Formula One record books when he finished fourth behind a victorious Max Verstappen in the Mexican Grand Prix. Hamilton's success - the third time he has taken the title without finishing on the race podium - elevated him to a supreme club alongside Fangio with only seven-time champion Michael Schumacher ahead of him. He was adding the 2018 crown to his championship wins in 2008, 2014, 2015 and 2017. The 33-year-old Briton's only remaining championship rival Sebastian Vettel of Ferrari, who needed a victory, with Hamilton outside the top seven, to keep his hopes alive, finished second.

He celebrated by executing 'doughnut' wheel spins for the cheering crowd before leaping out of his car and into the arms of his team. After being congratulated by Vettel, Hamilton said: "It's a very strange feeling right now." After surviving what turned into a battle of attrition at the Autodromo Hermanos Rodriguez he added: "It was a horrible race... I really don't know what happened.

"We were struggling both Valtteri (Bottas) and I and we had to just hang on and bring the car home.

"I've been with Mercedes since I was 13 and to complete this, when Fangio had done it with Mercedes, is an incredible feeling and it is very surreal to me at the moment.

"I just feel very very humble, of course I dreamed about this but I never thought I'd be standing here as a five-time champion."

"It is not easy today but well deserved for him and I want to congratulate Lewis. They did a superb job all year. We need to stand there, accept that and send congratulations. We would have liked to have hung in there longer, but it was not to be."

Reflecting on his season Hamilton added: "It has been the toughest year physically, mentally and personally with everything I'm committed to, but I have amazing support.

"Mercedes and my team have just been the most incredible unit and worked to raise the bar. In my mind it is just another day of fighting and I have more races to win, it is not over.

"In my mind I have to work, go to the debrief and try to win in Brazil.

Hamilton, who started third on the grid, struggled with chronic tyre-wear after making a strong start in his Mercedes and settled for a cautious cruise to the title without a podium finish.

Verstappen, upstaged by his Red Bull team-mate Daniel Ricciardo in qualifying on Saturday, came home 17.108 seconds ahead of Vettel after the luckless Australian pole-sitter retired with nine laps remaining.

"I was very determined to win and we've done that - we had the right tyres and the car was working very well...

"It was a shame to lose Daniel. We wanted two of us on the podium. A party tonight? No, I'm going home!"

A puff of smoke signalled an engine failure and his eighth 'Did Not Finish' (DNF) of the season while his 21-year-old Dutch tyro team-mate secured a repeat of his 2017 triumph, his second win this season and the fifth of his career.

Nico Hulkenberg was sixth for Renault ahead of Charles Leclerc of Sauber, Stoffel Vandoorne of McLaren, Marcus Ericsson in the second Sauber and Pierre Gasly of Toro Rosso.

For Ferrari, it was a first double podium success in Mexico since 1990 with Alain Prost and Nigel Mansell. Vettel for one wants Hamilton back as strong as ever in 2019.

"I told him to keep pushing for next year, as I need him good to fight him again," said the German, who with Raikkonen is aiming now to deliver the constructors title to Ferrari in the last two races.

Max Verstappen Formula 1
Get the latest updates on India vs Australia Series, check out the India vs Australia Schedule for 2020-21 and Ind vs Aus live score . Like us on Facebook or follow us on Twitter for more sports updates. You can also download the NDTV Cricket app for Android or iOS.