Max Verstappen had already incurred a five-second penalty after nudging Kimi Raikkonen's Ferrari off the track. 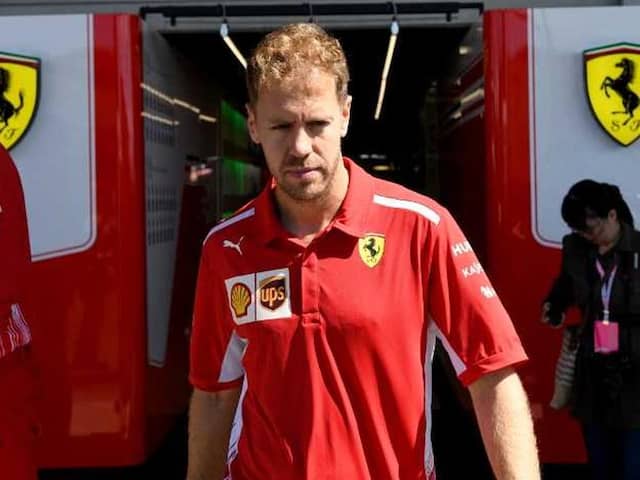 Sebastian Vettel tore into Red Bull's Max Verstappen for a hair-raising collision in Japan on Sunday that all but killed off the German's fading Formula One title hopes. After starting from eighth following a horror show in qualifying, Vettel carved through the field and made a daring lunge inside Verstappen at turn 13 to take third but his Ferrari clipped the Red Bull and spun off in a shower of sparks. Vettel recovered to finish sixth at Suzuka but now trails Lewis Hamilton by a whopping 67 points with four races left this season after his Mercedes rival roared to victory.

"I was obviously pushing to get past but I wasn't desperate to get past," said Vettel.

"The gap was there, I had the inside. As soon as he realises somebody is close or next to him, he tries to push when you shouldn't push anymore."

Verstappen had already incurred a five-second penalty after nudging Kimi Raikkonen's Ferrari off the track.

"I knew he had a penalty," insisted Vettel. "But I also felt that we were faster. For me, the gap was there -- otherwise I wouldn't do it.

"I got through the whole field without any trouble," added the former world champion.

"It's normal that it sometimes gets close but you need to always give the space and in that case I couldn't go anywhere and then we touched."

Verstappen saw it differently, sniffing: "He could have been a bit more careful."

The Dutchman also pointed to his move on Vettel in China earlier this year, which caused both cars to spin and led to a 10-second penalty for Verstappen.

"I'm not the one who makes the rules but I think it's a similar scenario to what I had in China with him," said Verstappen.

"He drove into the side of my car."

As his chances of pipping Hamilton to a fifth Formula One crown slip away, Vettel was still seething after the race.

"I don't regret the move," he bristled. "Obviously with that outcome you would do it differently. But the gap was there -- I had more speed, I would have made the corner."

Raikkonen was also in a dark mood after an incident on the opening lap when Verstappen drove over the grass at the chicane before bumping into his Ferrari.

"He ran wide and went off the track and I just went on the outside at the next corner, leaving him space," growled the Finn, who finished fifth.

"He knew that I was there and he just drove into me and pushed me off the track."

Verstappen though was unrepentant and called his penalty "stupid."

Told by Red Bull team boss Christian Horner that the Ferrari mechanics might be looking for him in the pit lane, Verstappen shrugged: "That's not my problem, they were too aggressive."

Lewis Hamilton Japanese Grand Prix
Get the latest updates on IPL 2020, check out the IPL Schedule for 2020 and Indian Premier League (IPL) Cricket live score . Like us on Facebook or follow us on Twitter for more sports updates. You can also download the NDTV Cricket app for Android or iOS.