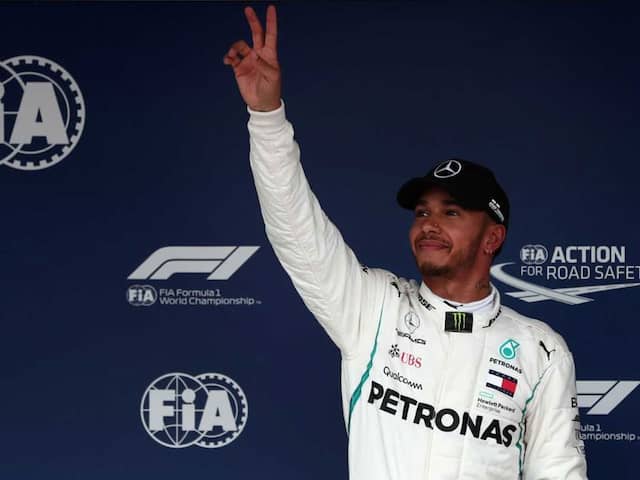 World champion Lewis Hamilton roared to pole position for the Japanese Grand Prix as Ferrari rival Sebastian Vettel slumped to ninth after a horror showing in Saturday's qualifying. Lewis, who leads Vettel by 50 points with five races left this season, led a Mercedes front-row lockout and will start as the hot favourite to tighten his stranglehold on the Formula One championship in Sunday's race at Suzuka. The Briton's record-extending 80th career pole never looked in doubt after his rampant form in completing a clean sweep of free practice earlier in the day.

"I can't believe I have 80 poles," said Hamilton, who has won five of the last six races.

"Never in a million years did I think I'd get 80. When it comes to being under pressure and making the right decisions, that's why we are the best team in the world."

Ferrari's decision to begin the top-10 shootout on intermediate tyres instead of super-softs backfired spectacularly as the rain they expected held off just long enough for Hamilton to set a fastest lap of one minute, 27.760 seconds -- three-tenths quicker than team-mate Valtteri Bottas.

Vettel skidded off twice in his desperation to set a time and his starting position will be his lowest of a season which began so brightly but looks like ending in bitter disappointment.

"This is not the position we deserve to be in," insisted the German, who had barely left the garage before informing Ferrari of their mistake over team radio.

"I think we have better pace than ninth so I'm not too worried."

Asked if he would look to have a say in the battle for the Formula One crown, Verstappen smiled: "Is it even a battle anymore, I don't know!"

Ferrari's Kimi Raikkonen qualified alongside the Dutchman on the second row.

Romain Grosjean steered his Haas to fifth ahead of Brendon Hartley and Pierre Gasly, who secured sixth and seventh on the grid for Toro Rosso at the home of the team's engine suppliers Honda.

Meanwhile, there were more qualifying woes for Red Bull's Daniel Ricciardo, who climbed out of his car and yelled an expletive into his helmet after suffering a mechanical breakdown.

"I lost power as soon as I went to start the lap," said the Australian.

"I could feel the car was jumping around, it didn't feel healthy. It's just frustrating -- I've cooled down a little bit but it's pretty painful. I just can't catch a break at the moment."

The Force Indias of Esteban Ocon and Sergio Perez qualified above and below Vettel to complete the top 10.

Hamilton controversially took his eighth chequered flag of the season at Sochi last weekend after Mercedes ordered Bottas to give up the lead.

But he has dominated in Suzuka and a fifth victory in Japan would put him on course to clinch the title with races to spare.

Valtteri Bottas Jos Verstappen Japanese Grand Prix
Get the latest Cricket news, check out the India cricket schedule, Cricket live score . Like us on Facebook or follow us on Twitter for more sports updates. You can also download the NDTV Cricket app for Android or iOS.