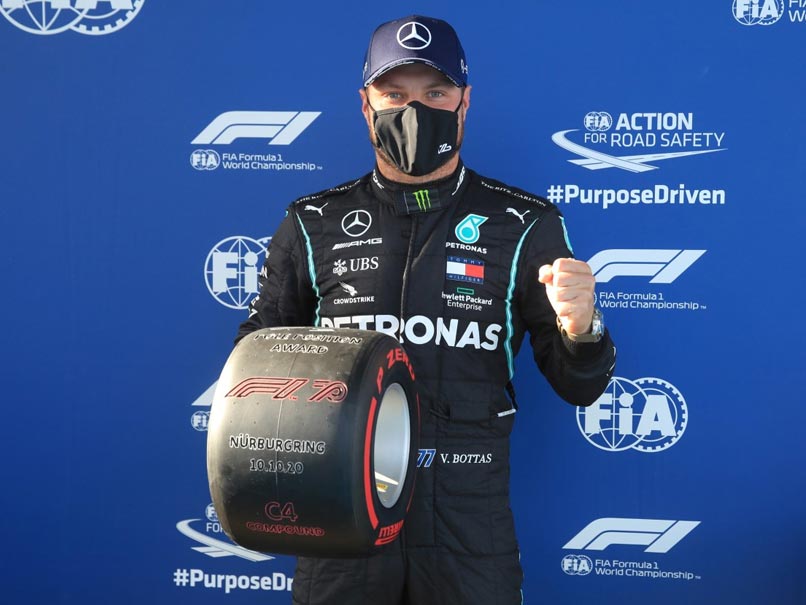 Valtteri Bottas clocked a best lap of one minute and 25.269 seconds on Saturday.© AFP

Valtteri Bottasproduced a blistering track record on his final qualifying lap on Saturday to edge Mercedes teammate Lewis Hamilton and claim pole position for the Eifel Grand Prix. Bottas clocked a best lap of one minute and 25.269 seconds to beat the championship leader by two-tenths of a second in very cold conditions following only one practice session after Friday's running was cancelled due to fog. It was Bottas's third pole this year and the 14th of his career, a feat that he hopes can help him keep alive his championship challenge. After winning in Russia two weeks ago he lies 44 points behind Hamilton. The two 'black arrows' were pushed all the way by Red Bull's Max Verstappen, who lost grip on his final run and wound up third ahead of Charles Leclerc of Ferrari and Alex Albon in the second Red Bull car.

"It is such a nice feeling when you do it on the last lap -- my last lap was spot on," said Bottas.

"It's been pretty tricky with short practice and these conditions getting the tyres in the sweet spot, that was one of the bigger things today.

The chilly autumn weather has shaped practice and qualifying. Friday's practice sessions were wiped out by fog and rain.

"I believe I can win," said Bottas. "That's the only goal for tomorrow and hopefully we can have a good start."

Hamilton, who needs just one victory to equal Michael Schumacher's record of 91 Grand Prix victories, had to settle for second on the grid.

"Valtteri is two-tenths ahead and he did a good job, so congratulations to him," he said. "There is plenty of time for me to regain...

Daniel Ricciardo was sixth ahead of his Renault team-mate Esteban Ocon, Lando Norris of McLaren, Sergio Perez of Racing Point and Carlos Sainz in the second McLaren.

Shortly before qualifying, Racing Point announced that Nico Hulkenberg would step in for Lance Stroll who was "unwell".

Hulkenberg, who covered for Stroll's teammate Sergio Perez at Silverstone, was called at short notice from a Cologne cafe. Without any practice, he qualified at the back of the grid.

The session began in bright, cold conditions with the air temperature struggling to exceed 10 degrees, but no repeat of the fog and rain that led to the cancellation of both practice sessions on Friday.

Hulkenberg was one of the drivers out early in the session to familiarise himself with Stroll's settings and the circuit before Verstappen set the pace for Red Bull, topping Bottas and Hamilton with Leclerc fourth.

The 'super-sub' pushed, but it was asking too much of Hulkenberg and he failed to reach Q2 and qualified 20th, although his time was only 0.9 seconds shy of team-mate Perez in ninth.

Out with him went Romain Grosjean, 16th for Haas, George Russell and his Williams team-mate Nicholas Latifi and, ahead of his record 323rd Grand Prix, Kimi Raikkonen of Alfa Romeo who joins 'the Hulk' in the back row.

The Finn's team-mate Antonio Giovinazzi, under pressure to retain his seat from rising F2 star Mick Schumacher, squeezed through for the first time this year.

Hamilton soon laid down a marker in Q2 in 1min 26.183sec before Verstappen trimmed that by almost half a second. Albon took third while Bottas slipped to eighth.

On their second Q2 runs, Hamilton regained top spot while Verstappen held off an improved Bottas in third.

Behind them, four-time champion Sebastian Vettel of Ferrari departed the session with a wave to the estimated 20,000 fans scattered around the circuit, along with Pierre Gasly and his Alpha Tauri team-mate Daniil Kvyat, Giovinazzi and Kevin Magnussen of Haas.

It was the eighth time in a row that Leclerc had topped his Ferrari team-mate Vettel in qualifying.

In the top ten shootout, Verstappen was fastest on his first run in 1:25.744 ahead of the two Mercedes men, with Bottas topping Hamilton and Albon fourth in the second Red Bull.

Hamilton responded by going quickest but it was not enough to resist Bottas who stormed through to take pole.

Lewis Hamilton Formula 1
Get the latest updates on ICC T20 Worldcup 2022 and CWG 2022 check out the Schedule, Live Score and Medals Tally. Like us on Facebook or follow us on Twitter for more sports updates. You can also download the NDTV Cricket app for Android or iOS.