India had last beaten Bangladesh in the SAFF Championship held in 2009. 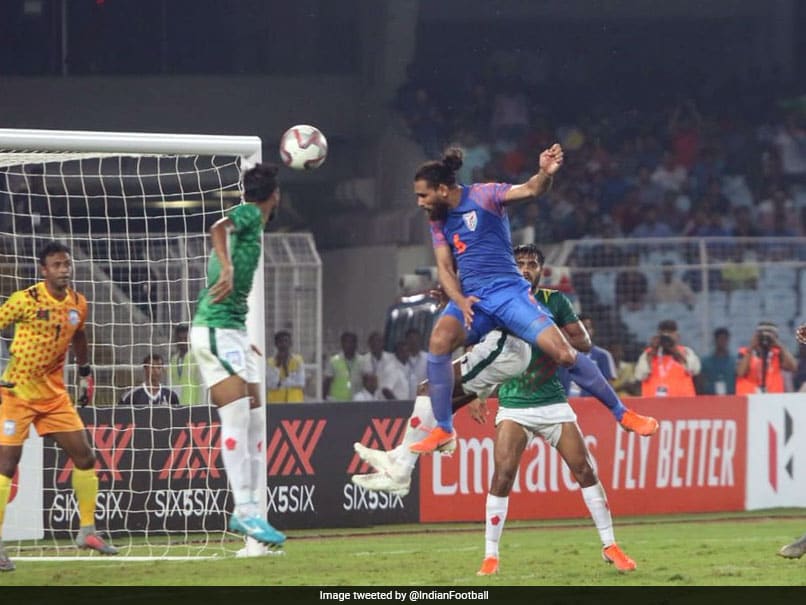 Adil Khan scored the equaliser for India vs Bangladesh.© Twitter

Adil Khan's clear header in the 88th minute helped India salvage a 1-1 draw against lower-ranked Bangladesh in the joint FIFA World Cup Qatar 2022 and AFC Asian Cup China 2023 preliminary Qualifiers match at the Vivekananda Yuba Bharati Krirangan in Kolkata on Tuesday. India had last beaten Bangladesh in the SAFF Championship held in 2009, since then India have only managed to play out draws against their neighbour. It was India's second consecutive draw after Qatar which saw them remain on the fourth spot of Group E with two points. India will next take on 146 ranked Afghanistan in an away fixture of the World Cup and Asian Cup Joint Qualifier.

Saad Uddin broke the deadlock for Bangladesh in the 42nd minute after a rare error from India's Gurpreet Singh Sandhu.

Rahul Bheke was sloppy for India from the outset of the match, he could have conceded a penalty in the early minutes, but the referee thought otherwise. India dominated possession in the early minutes and tried to create chances through long ball. Sunil Chhetri was clearly the target man for India once again but the Indian talisman failed to get the power on his shots.

Udanta Singh with his quick feet created quite a few half chances but none of the forwards could make the most of it from inside the box.

In the second half, India bettered their tempo, striving hard to look for goals but failed to get their finishing right. Bangladesh defence was well in place to see off the danger and begin a counter attack.

Mohammad Ibrahim had come close to scoring but his shot hit the crossbar on the 54-minute mark. Even Anas Edathodika's header was cleared off the line on the hour mark.

Adil Khan was also brilliant with his defensive duties as he made a goal-line clearance in the 73rd minute.

The final minutes saw India throwing their kitchen sink in the match but failing to find a winner.

India Sunil Chhetri Adil Khan Football
Get the latest updates on SA vs IND 2021-22, check out the Schedule and Live Score . Like us on Facebook or follow us on Twitter for more sports updates. You can also download the NDTV Cricket app for Android or iOS.