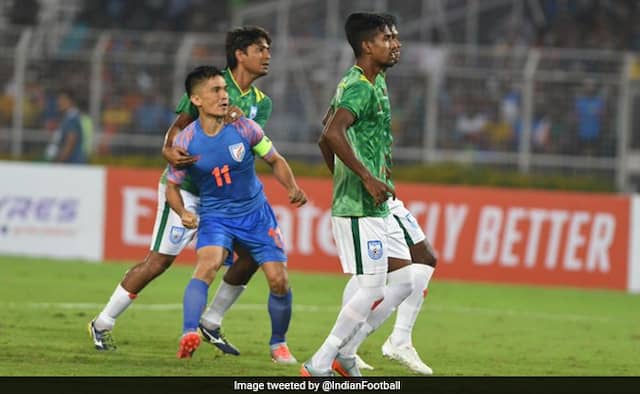 Adil Khan's clear header in the 88th minute helped India salvage a 1-1 draw against lower-ranked Bangladesh in the joint FIFA World Cup Qatar 2022 and AFC Asian Cup China 2023 preliminary Qualifiers match at the Vivekananda Yuba Bharati Krirangan in Kolkata on Tuesday. India had last beaten Bangladesh in the SAFF Championship held in 2009, since then India have only managed to play out draws against their neighbour. It was India's second consecutive draw after Qatar which saw them remain on the fourth spot of Group E with two points. India will next take on 146 ranked Afghanistan in an away fixture of the World Cup and Asian Cup Joint Qualifier.

India Sunil Chhetri Football Football Live Score Live Blogs
Get the latest Cricket news, check out the India cricket schedule, Cricket live score . Like us on Facebook or follow us on Twitter for more sports updates. You can also download the NDTV Cricket app for Android or iOS.