Kylian Mbappe reacted furiously after being substituted by Thomas Tuchel midway through the second half. 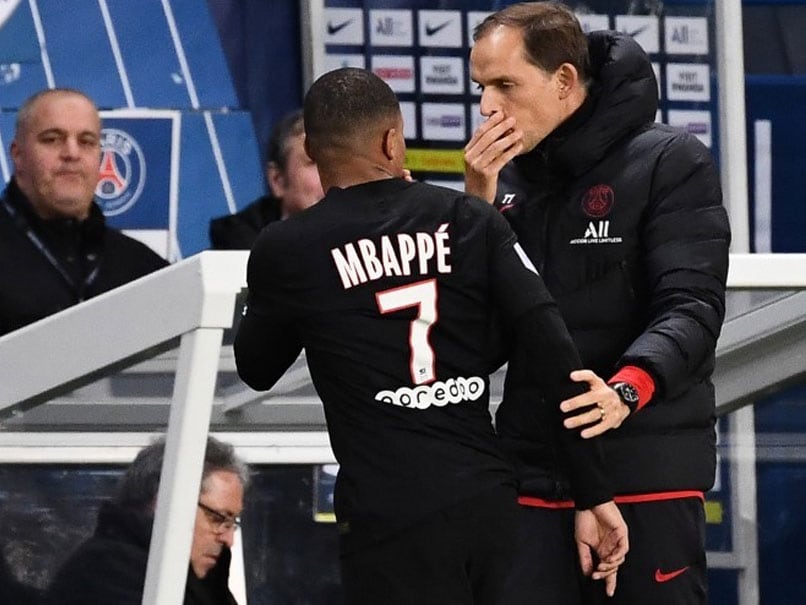 Kylian Mbappe and Thomas Tuchel had a verbal altercation after the former was substituted.© AFP

Kylian Mbappe has set himself on a collision course with Paris-Saint Germain manager Thomas Tuchel after a verbal altercation between the two on Saturday. The French superstar reacted angrily after being substituted by Tuchel midway through the second half, replaced by Mauro Icardi with PSG leading 5-0 against Montpellier. Kylian Mbappe found the back of the net in the 57th minute as French Ligue 1 leaders battered the opposition into submission. However, Mbappe was visibly furious with the manager's decision to take him off.

Cameras captured Tuchel stopping Mbappe from storming off the pitch and both seemed to have a verbal exchange, putting their hands over their mouths to prevent television cameras from seeing what they were saying.

Neymar always respects his managers (Emery/Tuchel/Martino/Enrique) and never made a scene when subbed off etc.

Kylian Mbappe was fuming after he was substituted pic.twitter.com/YNnOKhL4yo

Tuchel was also forced to answer questions about Mbappe's angry reaction in the post-match press conference.

"It doesn't look good, but we are not the only club where players react like that," the coach said.

"This team shows how professional and focused they are every day, but this gives the impression it's not always like that and I'm sad because it's not necessary.

"I explained to him why he came off and that will be that. I always make decisions for sporting reasons. This is football, not tennis, and you have to respect everyone."

The PSG boss also admitted Neymar's latest lavish birthday celebrations were a "distraction" at a key time in the season.

On Sunday, the Brazilian star is set to host a lavish party for his 28th birthday at a Parisian nightclub, despite his team playing again on Tuesday against Nantes.

"It's a distraction, that's clear," said Tuchel. "I always want to protect my players, and if there are difficult things to talk about I prefer to say them internally.

"These are distractions, and they give the impression we are not serious, not professional. But I don't really want to talk about it because then these things become big issues."

Paris SG Neymar Kylian Mbappe Football
Get the latest updates on ICC T20 Worldcup 2022 and CWG 2022 check out the Schedule, Live Score and Medals Tally. Like us on Facebook or follow us on Twitter for more sports updates. You can also download the NDTV Cricket app for Android or iOS.