Kylian Mbappe netted either side of Neymar's effort before Mauro Icardi added a late fourth for PSG vs Amiens at the Parc de Princes. 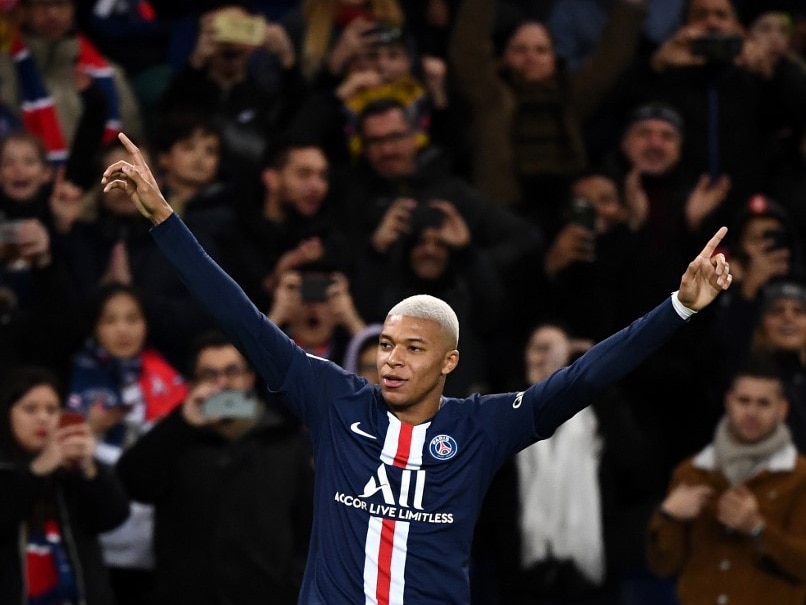 Kylian Mbappe scored twice as PSG maintained their seven-point lead at the top of Ligue 1.© AFP

Kylian Mbappe scored twice as Paris Saint-Germain maintained their seven-point lead at the top of Ligue 1 with a 4-1 victory over Amiens on Saturday. World Cup winner Mbappe, who celebrated his 21st birthday on Friday, netted either side of Neymar's effort before Mauro Icardi added a late fourth at the Parc de Princes. Steven Mendoza claimed a consolation effort for the visitors who dropped into the relegation zone. "Kylian and Neymar are really good together, they've gained confidence. Neymar pushes Kylian and Kylian pushes Ney," PSG coach Thomas Tuchel said.

"We played like a team. Now the challenge is to keep this attitude," he added.

Second-placed Marseille remain behind their bitter rivals going into the two-week winter break with a 3-1 win over Nimes.

Tuchel recalled Neymar, the world's most expensive player, to the squad after resting him for the midweek League Cup victory over second-tier Le Mans.

Mbappe opened the scoring after 12 minutes to claim his 40th goal of the calender year, chipping over goalkeeper Regis Gurtner after a sweeping counter-attack move.

Neymar scored a second, his fourth in as many league matches, two minutes into the second half before captain Thiago Silva left the field with an ankle injury after 58 minutes.

Mbappe clinched his double on 65 minutes firing past Gurtner's near-post.

Colombia winger Mendoza netted his fifth of the season with 20 minutes to play before Icardi made sure of the rout after 84 minutes.

The 38-time France international was inches away from claiming the opener before Sofiane Alakouch turned a cross into his own net.

He was involved in the build-up to Dario Benedetto's second effort before celebrating his second goal in four matches by donning a Santa Claus hat.

"We'll make the most of the holidays because we've deserved them. We will rest well before attacking January and February which will be tough," Payet told Canal+.

Rennes rose to third edging Bordeaux 1-0 thanks to Mbaye Niang's effort as Lille dropped to fourth after a 5-1 hammering at Monaco.

Metz moved out of the bottom three with a 2-2 draw at 16th-placed Dijon due to Habib Maiga's injury time equaliser.

Paris SG Kylian Mbappe Neymar Football
Get the latest updates on ICC T20 Worldcup 2022 and CWG 2022 check out the Schedule, Live Score and Medals Tally. Like us on Facebook or follow us on Twitter for more sports updates. You can also download the NDTV Cricket app for Android or iOS.