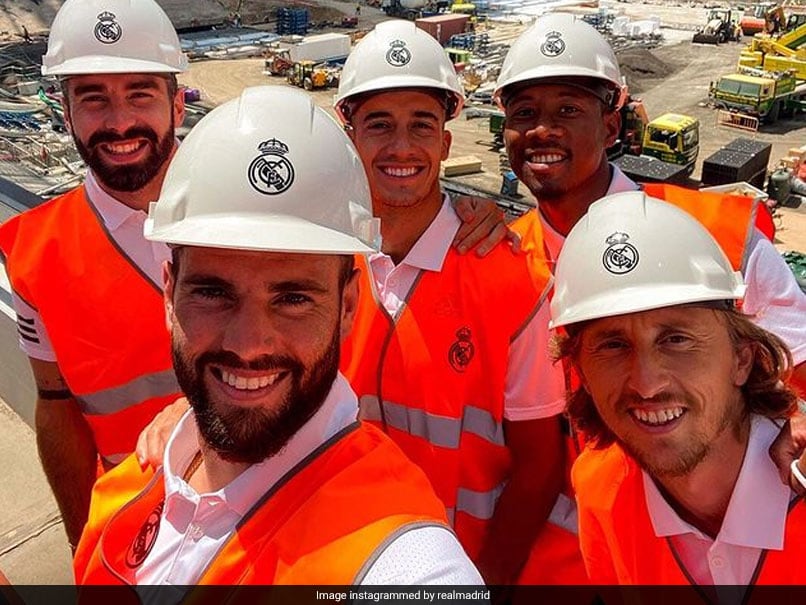 Led by Luka Modric and Nacho Fernandez, some Real Madrid players visited the Santiago Bernabeu, which is currently undergoing renovation. According to an official statement by the club, the players were also shown a number of videos that explained the work being undertaken as a part of the revamp project. The La Liga outfit took to social media to post a video of the players taking a group selfie at the venue. Other than Modric and Nacho, the other players were Dani Carvajal, Lucas Vasquez and new acquisition David Alaba.

With La Liga's 2021-22 season having begun, the Spanish outfit has been playing at their reserve team's stadium for more than a year.

The Santiago Bernabeu was expected to open up for the new season, but the video suggests that the iconic venue's revamp project still needs some time for completion.

Many fans poured into the comments section with support for the new campaign.

The Carlo Ancelotti-coached team began their new campaign with a 4-1 win against Alaves on August 15.

Karim Benzema scored a brace, along with goals from Nacho and Vinicius Junior. Joselu scored a consolation goal for Alaves.

In their next La Liga match, Real Madrid are set to face Levante on August 23.

Despite the departure of Sergio Ramos and Raphael Varane, the Spanish club will be aiming to have a good domestic season and challenge for La Liga title.

Despite some brilliant performances by Karim Benzema in the 2020-21 season, the capital club missed out on La Liga title by two points to city rivals Atletico Madrid, who registered 86 points from 38 games.

Dani Carvajal
Get the latest updates on ICC Women's Cricket World Cup 2022 and IPL 2022, check out the Schedule , Live Score and IPL Points Table. Like us on Facebook or follow us on Twitter for more sports updates. You can also download the NDTV Cricket app for Android or iOS.