Lionel Messi's wife Antonella Roccuzzo shared a video of the Argentine superstar playing football with their three sons -- Thiago, Matteo and Ciro -- in the backyard. 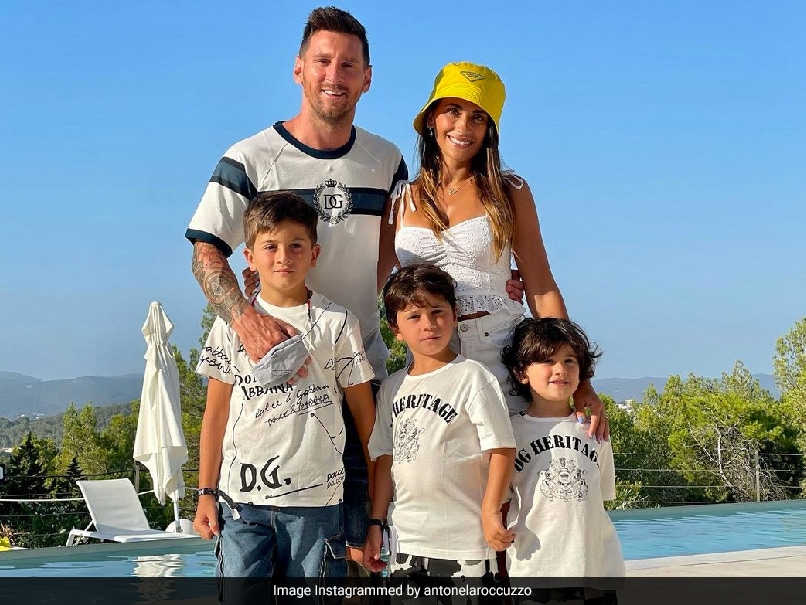 Lionel Messi is regarded as one of the greatest footballers of all time. After spending nearly two decades at FC Barcelona, the Argentine maestro is currently playing for French side Paris Saint-Germain (PSG). Recently, Messi's wife Antonella Roccuzzo shared a video of the former playing football with their three sons -- Thiago, Matteo and Ciro -- in the backyard. In the video, Messi can be seen teaming up with his youngest son Ciro, for a backyard football match with his other sons.

While Messi showed no mercy to his kids in the backyard, Antonella wasn't happy with her husband refusing to give an inch to their kids.

"Deja ganar a los nenes (Let the kids win)," Antonella captioned the video on her Instagram story. The video was also shared later by ESPN FC.

After spending 16 seasons at Barcelona, and notching up 672 goals in 778 appearances, Messi joined PSG as a free agent after his contract had expired last summer.

Messi got on the scoresheet as PSG thrashed Lorient 5-1 at the Parc des Princes on Sunday.

So far, Messi has scored 8 goals and also provided 11 assists for PSG this season across all competitions.

With the win, PSG moved 12 points clear at the top of Ligue 1 table, ahead of second-placed Marseille.

Messi, who will lead Argentina to the World Cup later this year, has also scored 80 goals in 161 appearances for La Albiceleste.

He also the led the team to their first Copa America title last year, their first title in 28 years (1993).

Argentina have been drawn into group C alongside Poland, Saudi Arabia and Mexico.